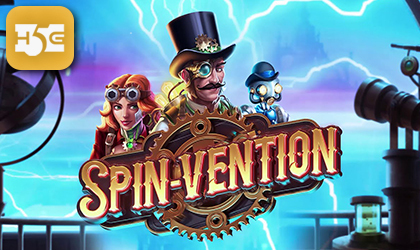 High 5 Games (H5G), an online casino provider, takes players on a science fiction adventure with Spin-vention Prize Line slot. The punters will meet here with an interesting inventor and his girlfriend and robot which helps players to find hidden treasures. The awareness of details in this game is remarkable, and players will see fluffy clouds of cotton balls and an airship that sometimes passes through the window in the background. However, what will immediately catch the player's eye is the horizontal "build line" above the reels. The only modifier here rarely gives a big win. However, when combined during the bonus round, excitement will certainly appear.

A title has 5 reels, 3 rows and 20 active paylines where the maximum potential win is 10,174x the bet. The betting range is pretty wide, so players can start betting from $0.2 up to a maximum of $100, and this range should fit most players. This is a high volatility game, so players should bet smarter in order to survive in the long run, however, the RTP is 96%, which is around the average.

Above the reels is a horizontal prize line, which is the place where the various modifier symbols go from right to left with every spin. In order to benefit from Prize line symbols, players will need to get a lighting cube wild symbol and then the cube will move upward to capture modifier symbols present on the corresponding reel and players can win from 2x to 100x the bet. The extra spins bonus round is activated whenever an arrow-globe appears on the Prize line. The combination of the wild cube and extra spins symbols helps players to get additional spins.

H5G is a New Jersey-based land-based casino and slot software manufacturer established in 1995. It has over twenty HTML5 slots and over 200 games. Notable games from this brand include A Night of Mystery with 9, Golden Knight and Way Out Wilds slot machine. The titles provided by this game supplier are featured on Facebook and Carnival Cruise Lines as free offers. In 2010, the company won the IGT Online Game of the Year award for its Noah's Ark slot. It recently received the Best New Game in North America award for games released in 2015 and 2016. The American Gaming Association also named it site the best communication site of the year.