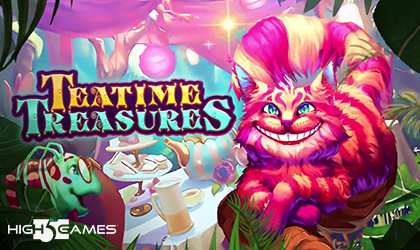 High 5 Games (H5G) has announced the release of another awesome slot game.

The new game is titled Teatime Treasures and is…

…inspired by Alice in Wonderland. The supplier has gone above and beyond when it comes to the visuals, making this slot a unique experience.

Going Down the Rabbit Hole:

This latest release is a proper thriller that takes players on a wild adventure straight into Wonderland!

That’s right; the developer has created an immersive…

…game that is greatly inspired by Alice and her Adventures. The new title takes place deep in the forest with the thick canopy barely letting enough sunlight through. Oversized flowers, wacky mushrooms, and an odd, smiling cat are enough to let the player know that something is afoot.

More clues can be found on the reels where symbol design tells the complete story. Namely, the team behind this game went with a classic selection of motifs that include teacups, crowns, pocket watches, and funny-looking hats – all of the stuff that associate to Wonderland adventures.

The lower paying tier of symbols comes in the form of card suits and offers a great contrast to the rest of the iconography. Last but not least, the soundtrack perfectly matches what’s happening on the reels.

The 5x5 slot game is equipped with 25 paylines. Aside from its fairly volatile base game, this slot offers several interesting special features.

Namely, players can expect to…

…trigger the Wild Train feature where a caterpillar munches its way through the reels, offering all kinds of awesome rewards. There’s also the bonus spin mode and the Jackpot bonus!

Lauren Gazneli, Senior Manager of Client Partner at H5G, said: “We are excited to see the Wild Train feature make its return to online casinos worldwide in such a nostalgic way. Teatime Treasures will sure bring the fun adventurous ride of wonder through a classic tale we all know and love. With the entertaining feature and colorful game art, we are eager to get this game released with the in-game promotions available to our operators worldwide.”

High 5 is a premier software provider that is specialized in creating and distributing high-end slots for the iGaming market. The company has been around since 1995, making great content and reaching players worldwide. Speaking of which, it has an established presence in over 50 countries on 6 continents.

Thanks to its attention to detail and quality, it has managed to establish a massive distribution network that includes a variety of highly popular names. The company continues to follow a busy schedule packed with interesting new releases.