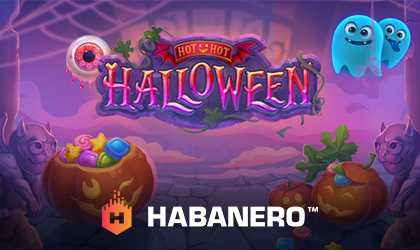 Habanero has announced the release of a new title inspired by Halloween. As a matter of fact, they’ve decided to title the game, Hot Hot Halloween! Featuring…

…an interesting base game paired with great features and an immersive theme, the game promises to be the perfect dose of spooky fun you’d want during the holiday season.

Habanero has been busy lately when it comes to game releases. Their latest offering brings a spooky vibe to the reels that matches the holiday spirits. However, where most other games of this genre try to be scary, the supplier went down a different route. Their take on Halloween is much less serious, which makes for a rather enjoyable experience.

The theme features a scene set in dark suburbs lit by candlelight. The reel frame is all about introducing an old-school horror vibe into the set. With that said, what happens on the reels is much less serious. The symbol design for this slot is full of cool details. Players will run into cute little ghost figures as well as cartoonish coffins and many other similar icons.

Aside from looking rather cool, the title brings with it a number of interesting features as well. The game is based on a 5x5 reel design and uses a row-specific multiplier system to…

…spice things up further. With that said, the game offers more excitement to those who are lucky enough to trigger one of its special features.

Fans of this slot can look forward to a standard bonus spin mode, wild symbols but also something called Hot Hot. This feature will take all Seven symbols from the reels and turn them into the triple Seven symbols while all others are doubled. Overall, the game promises to be quite entertaining even for those who are looking for a more thrilling package.

With its cute graphic design, this title is definitely among the more laid-back releases that we’ve seen this season. The studio takes pride in delivering seasonal content and it is fair to say that they have outperformed themselves this time around.

Habanero Systems is one of the top software providers specialized in delivering high-end slot games and supporting tools. The company is known for being very meticulous in their approach to game design, often going above and beyond in order to ensure complete user satisfaction.

With a team of dedicated professionals from three countries and two continents, it is constantly on the lookout for ways to improve their product but also the industry itself. They have shown great innovation, thus attracting a large number of partners who have created a massive network of distributors worldwide.