Habanero Goes for the Net in Knockout Football Rush 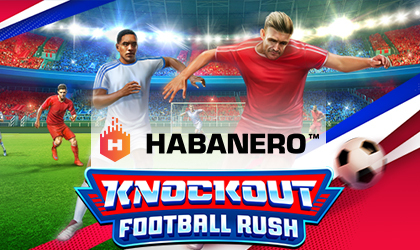 Habanero has announced the release of a brand-new slot game that is supposed to hit the markets at the end of March.

…is all about football and potentially lucrative features. With that said, the game has a classic feel to it thanks to its core mechanics.

The developer’s newly announced slot is all about football life. The team behind this release has gone above and beyond in terms of creating an immersive football-themed game.

Fans of this sport…

…will find themselves on the sidelines of a massive stadium. With spotlights illuminating the turf in the background, the whole game feels rather authentic. That being said, the symbol design is where things really get interesting.

Namely, the creative team at Habanero went with a combination of bright colors and football accessories. As a result, the reels offer a very colorful visual treat once you press that spin button.

Symbols feature differently colored whistles as well as footballs in flight, cleats, goalie gloves and much more. Needless to say, fans of this sport won’t be disappointed with this awesome release.

A Classic Touch to a Modern Slot:

One of the more interesting things about the new release is the fact that this is a 3x3 slot that offers max potential win of 14400x the original bet. The base game features an estimated RTP of 96.8% although they’ve allowed different operators to adjust the RTP range as they see fit.

For starters, a wild symbol can land on row 3 at any time during any spin. Every wild that lands on the reels will stick and move up with every spin. Landing 3-5 wilds will apply an x2 multiplier to your win. Landing 6-8 wilds will apply a x4 multiplier. Those who are exceptionally lucky might even land all 9 wilds and unlock the staggering x60 multiplier.

Habanero is one of the leading software providers specialized in slots. The company has been operating in the iGaming industry for long enough to become a figure of authority. By constantly researching and developing innovative gaming solutions, this provider has ensured that players and operators alike will find something new and exciting with every release from the brand.

The team consists of seasoned veterans of the industry who have decades of cumulative experience and knowledge. So far, the company has managed to build a massive distribution network that includes some of the top operators in key markets.