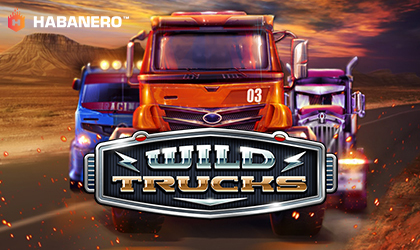 Are you a fan of big rigs and the smell of diesel in the morning? If so, Habanero has released a perfect game for you. It’s an 18 wheels of steel-inspired slot that is full of all the things petrol heads adore.

The game is very attractive from the get-go and promises to be a proper hit. The brand’s ability to pack everything up nicely shows with this game as well. As brutish and rough as the theme is, the game underneath is a well-oiled machine.

A Custom Paintjob to Start Things Off:

The theme is arguably one of its best features. It’s a nice composition aimed at those who appreciate the aesthetics of North American big rigs. Players are introduced to all kinds of sleeper semi configurations, day cabs, shiny chromed pistons and skull gear shifters.

All of these show up as icons on the reels. If that wasn’t enough, the player will also see things like trucker hats and gas station nozzles. In general, a closer look reveals every well-known symbol related to trucking. Further, they went on to animate every single icon, which improves the aesthetics of this game even further.

The background fits the theme perfectly. It features a highway on ramp network with cars going by on the overpass. From a purely visual side, designers did a fine job with this online slot game. They gave it the shiny, custom Paint job it deserves!

While NASCAR fonts and flashy graphics make the game attractive, they don’t necessarily make it good. Every slot that has this much work put into it deserves a proper base game to drive it. Habanero recognized this on time. The entire game was built on a very robust base mechanic.

This is a 5-reel, 3-row slot with all the regular bells and whistles one would expect to see. Although there is nothing inherently unique about it, such a familiar base game makes the game smooth and consistent. Players can expect a good deal of good old-fashioned fun.

Special features the studio went with include a modified spin mode and a progressive jackpot. The former grants the player up to 75 bonus spins depending on what shows up on the reels. The progressive jackpot is completely random and is added to the overall win at the end of the spin.

While it isn’t among the most anticipated releases of this quarter, Wild Trucks definitely piqued the interest of many players and online casinos alike. The software provider behind this title did a decent job with a promotional campaign that catered to petrol heads in particular.

Toni Karapetrov, the head of corporate communications at Habanero, stated:

“Wild Trucks is a rip-roaring new slot and we’re thrilled to let it loose on the road.”

His excitement is shared by the entire team. He further added: “With exciting new Wilds and Free Game offers, few slots offer this much intensity and anticipation for features to combine and award huge wins.”

We are left to see how this new and combustive title does out there in the real world. Being a fresh release, we can expect the first impressions to start trickling in pretty soon.