Greentube Turns the Spook to the Max with Ghostly Towers Release 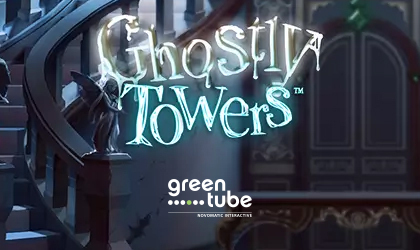 Greentube, a NOVOMATIC Interactive division, has released a brand-new slot game titled Ghostly Towers. The new game is all about bringing the paranormal to the reels.

This goes both in terms of the visuals but also potentially lucrative features. Fans of the horror genre are in for a real treat with this slot.

A Different Kind of Slot:

This latest slot is packing a paranormal theme that is every bit as spooky as it is exciting. The team behind the title went all out in terms of visuals, details, and animations.

When the game loads up, players are presented with a…

…scene that depicts a center foyer of an old, abandoned manor with those trademark dual staircases. None of this would be all that interesting if it wasn’t the dead of night and if there weren’t ghostly apparitions roaming about!

…designed to match the theme but are generally quite simple. The team went with the card royals in the lower-paying tier while the higher paying set of symbols includes various ghostly icons and gems. Lastly, there’s the soundtrack that has a strong Adams Family vibe to it. Overall, the slot is definitely one of the brand’s more cinematic releases.

The game is a 5x3 grid slot that runs on 20 paylines. This is a medium volatility game that is quite packed with special features. Players can look forward to things such as a solid bonus spin mode and a number of features that involve Pierre – your ghostly host in this adventure.

Lastly, there’s the Spooky Symbol Slither feature. In this one, Pierre appears on the reels, swings his saber removing several symbols, only to have those replaced with ones that match whatever is left on the reels.

Greentube is a software development company that traces its roots all the way back to 1998. This was the year when Durschmid&Reisinger OEG, the original brand, released its first game. It was a 3D sports game titled Ski Challenge. Ever since that moment, it has remained on the cutting edge of game design and gaming technologies.

The only difference being that nowadays this team works exclusively in the iGaming industry. Becoming a part of the NOVOMATIC Group has allowed the brand to truly fulfill its potential and invest all of its efforts into quality gaming content.