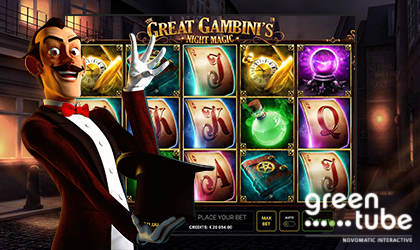 Magic is all around us, we just need to open up their eyes to notice it. If you’re still suspicious about it, then it’s the perfect time to launch the latest slot from Novomatic-owned brand, Greentube and see it for yourself!

Whenever a game revolves around something enchanting, you can be sure that it is filled with surprising and thrilling moments.

The same goes for this one. It doesn’t fail to shock you with its uniqueness and wonderous features. According to some reviews written about it, this one has a huge chance of becoming one of the best games from this developer.

What Does It Have?

The game contains casino spins feature, that comes with several slots spins symbols. Three of them will grant you with ten additional spins, four with ten of them and five with fifteen extra spins.

During this feature, gamers will be bestowed with a special icon with every spin. If this sign is seen across the reel three, then it will turn into stacked character and it will be copied to all reels to the left in order to make more winning combinations.

Furthermore, the good thing about the Magic Reel is that it has the power to expend and cover reel four and reel five during this feature.

If this occurs, this reel will remain in these positions until the very end. If you are hungry for more, you must rely on the good will of The Great Gambini. He could reward players with more of them, but only if he is in a good mood.

In the first one, the Great Gambini can make a couple of icons disappear and replace them with the new ones that can help the users get a winning combination.

During the second one, he can switch the reels in order to uncover more fruitful combination. The good side of this feature is that it can occur more than once!

Furthermore, he is also present during the third modifier during which he can also swap the positions of at least one symbol in any direction, with a goal to create additional winning combinations.

And the last one also has him involved. Namely, he will drop the guillotine and once it is pulled up, players will get another chance for more winning combinations.

Moreover, this can also happen several times and has the possibility to activate the Casino Spins bonus.