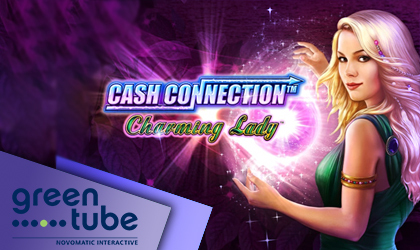 The latest release from Greentube brings a classic slot experience wrapped in mystery. Cash Connection Charming Lady is an interesting game that caters…

…to those who appreciate the more traditional slots. With that said, the game also comes with a few awesome features that give it a thrilling nature.

The Novomatic interactive division, has dropped a new slot game. The company went for a traditional vibe with this release, which is apparent the moment the game loads up. From an aesthetic standpoint, this slot…

…is leaning towards the basic side of things. There are no flashy, complex background images. Instead, players get to enjoy a fairly neutral theme that allows them to focus on what’s happening on the reels.

With that said, the graphics are decent. The background image depicts lush foliage, but instead of being green, you’re dealing with the purple variety. Everything is also animated, which adds an interesting feel to the game.

Symbol design matches a traditional theme via some of the more classic symbols chosen for this game. Players will once again see horseshoes, four-leaf clovers, lucky rabbit paws and more. The lower paying… …

At the core of this title lies a 5x3 grid that runs on 10 fixed paylines. The base game is pretty simple and matches what you’d expect from a classic leaning slot. The game doesn’t have many special features, but the ones that are available definitely…

…transform this relatively traditional release into a potentially lucrative powerhouse. There are two features – the progressive jackpot that offers 4 different jackpot levels, and the lock & spin feature.

The former is pretty self-explanatory while the latter relies on players drawing special sphere symbols that ultimately trigger the spin & lock mode. Once triggered, players will get the chance to collect…

…more sphere symbols that are ultimately locked into place once drawn. Collect enough spheres and you’ll earn a chance to take home one of the offered jackpots!

Greentube is one of the premier software providers in the iGaming industry. The company has existed in one shape or another since the late ‘90s when they were working on 3D sports games. Since then, it has dedicated its efforts to creating innovative iGaming solutions that would work for both the player and the operator alike.

Due to its dedication to quality software development, it popped up on Novomatic Group’s radar in 2010 which is also the year it got acquired by this giant.

As of right now, it is still making high-quality games that offer a potentially lucrative and almost always engaging experience to players worldwide.