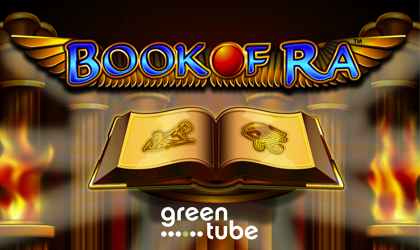 Greentube, a slot game specialist and the interactive department of the NOVOMATIC Group, has announced the release of a brand-new game. Titled Book Of Ra 10, the new game is…

…taking players on an exciting adventure back into the heart of Ancient Egypt. This time around, there are innovative core game mechanics and awesome special features.

Tale as Old as Time:

The latest title from the NOVOMATIC Interactive division, represents another take on the Ancient Egypt theme. The game features everything a hardcore fan of this specific genre would want to see on the screen.

There are pyramids, sand, the scorching hot sun sitting low in the sky and, of course, a variety of potentially lucrative features. From a purely visual standpoint, this slot game is impressive. Despite only having static backgrounds, the game feels very vibrant thanks to the highly detailed graphics.

There are several backgrounds. The default one features a scene where several Egyptian temples are towering over the reels, blasted by a crimson sun in the background.

This combination of sand, ancient temples, and dark red skies give this whole scene a surreal atmosphere. Once certain features are triggered, the game moves inside one of the temples and the scenery changes accordingly.

One of the details that make this slot stand out from the rest is the addition of a second reel. Namely, players will have one standard 5x4 reel setup on the left side of the screen, while the right side of the screen houses the other, 5x12 reel setup. The overall number of paylines is 100. However, this figure is divided among the two reels where smaller one runs on 25 paylines while the larger one runs on the remaining 75.

As far as special features go, there are stacked wilds that will transfer from the smaller reel to the larger reel, thus increasing players’ chances of scoring a lucrative win. There are also Special Expanding Symbols – a feature that many loved in the previous installments of this series.

Overall, the entire game offers a worthy sequel to the Book Of Ra, thus ensuring that the fans of this series will absolutely enjoy the newly released experience.

Greentube is an interactive division of the NOVOMATIC group. This software studio is specialized in creating and producing high-end slot games. They offer both mobile gaming content as well as desktop-oriented casino solutions. Aside from slots, fans of this brand can also enjoy a various video poker games, video bingo, table games and more.

The brand draws its roots from a small company that has created the famous 3D sports game Ski Challenge back in 1998. Since then, they have been on the edge of gaming solutions with the accent being on the iGaming industry.

Due to their innovative drive and successful portfolio of games, the company was acquired by NOVOMATIC in 2010.