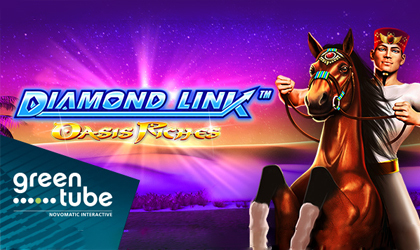 Greentube, a NOVOMATIC interactive division, has released a new slot. The game is titled Diamond Link Oasis Riches and brings a combination of great features, an interesting theme, and potentially rewarding wins.

Fans of the Egyptian-themed slot are in for a treat with this one!

An Oasis in the Middle of a Desert:

The latest title is all about finding a true treasure in the middle of a barren desert. Just like actual travelers of old would discover life-changing resources in an oasis, players can find potentially life changing riches in this slot.

The theme is very simple and to the point. The brand’s creative team went with scenery that depicts an Egyptian desert at dawn, with purple skies covering the reels.

The only thing breaking up the monotony of golden sand…

…is the oasis with its lush greenery and freshwater. Symbol design combines Egyptian motifs with various treasures.

The lower paying set comes in the form of card royals, as usual. However, these symbols are fairly stylish. The developer definitely went a step beyond the bare minimum, to say the least.

The higher paying tier of symbols depicts a variety of Ancient Egyptian items such as footwear and various jewelry. On the other hand, there are also diamonds, golden rings and more.

The game features a 5x3 grid slot that uses 25 fixed paylines. However, the game comes with a number of interesting special features. Namely, players can expect to run into the Win Spin feature that is essentially a stylized bonus spin mode with sticky diamond symbols.

Then there’s the Diamond Link feature where players who collect 6 diamonds get a chance to spin one of the four jackpots. The game offers Mini, Minor, Major and Grand jackpots, each bringing different amounts.

Out of its four jackpots, Major and Grand jackpots are linked with other Diamond Link slots in the series. This allows players to potentially win extravagant amounts if lady luck turns their way.

Greentube is a software provider that offers some of the most innovative slot games in the iGaming industry. Founded in the early ‘90s. The developer’s first big project was a 3D sports game titled Ski Challenge that was released in 1998.

Since then, this company has shifted towards the iGaming industry where they have remained at the very forefront of technological development. In 2010, the company was acquired by NOVOMATIC Group, becoming a part of this massive entertainment conglomerate.

As of right now, the brand still makes advanced slot games and other gaming content. It’s run by a team of dedicated professionals who are always looking for ways to improve the end user’s overall experience.