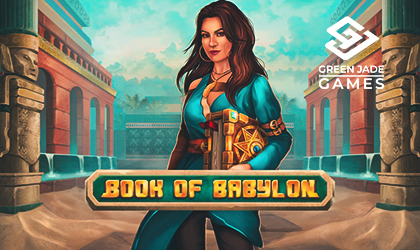 Green Jade Games takes players on an adventure in the ancient city in Mesopotamia, Babylon where there is a mysterious and powerful book that, when opened, can bring incredible treasures and huge payouts. The supplier has brought its own twist to the game to provide a fun gameplay experience in Book of Babylon.

The title is played on 5 reels, 3 rows, and 10 active paylines where the maximum potential win is 5000x the bet. The game comes with bonus features such as wilds, extra spins, and expanding symbols. This is a medium volatility title combined with an RTP of 96.28%, which is above the average. The wild symbol is the book and replaces any symbol in the main game. It also acts as a scatter and pays when it lands anywhere on the reels. Scatter prizes are multiplied by the bet amount and If 3 or more scatters symbols appear, the extra spins bonus is activated where players will get 10 extra spins and this feature can be re-activated up to 3 times. When entering extra spins mode, a random symbol is selected and becomes expanding symbol. This symbol can also appear anywhere on the paylines for even greater potential profit!

Thrilling Experience with Every Round:

The game not only has a great appearance, but the bonus features and mechanics are created to make every move fun and exciting. Additionally, extra spins with expanding symbols increase the level of entertainment!

Mark Taffler, Chief Commercial Officer said: “Book of Babylon takes players on a real adventure to the heart of the world’s most famous ancient city where they have plenty of chance to discover treasures and big wins of their own thanks to the game’s bonus features."

Green Jade Games is part of the MRG group and the history of this company began in 2007 when the brand was established and rapidly grew in 2008 with the launch of Mr Green online casino. Established in Malta in 2017, the level of entertainment is the most important aspect for the company, which is deeply connected to its success. The Malta-based company is run by Benedict McDonagh and Jesper Karrbrink, both of whom have decades of experience in the iGaming industry. It took this talented team of developers and designers almost a year to launch their first slot machine, Hammer of Fortune.