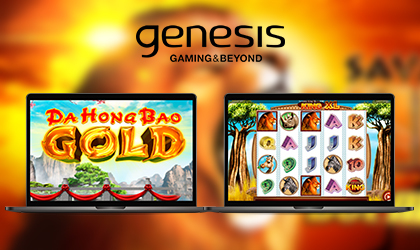 Genesis Gaming has announced two new games for their fans. The wildly successful Da Hong Bao is getting a sequel and so is the Savanna King.

The new games will…

…bring a higher potential payout to lucky players as both are packed with custom-tailored features that work towards improving the max win amount.

The developer has achieved a lot of success with the release of Da Hong Bao. The game became highly popular in key markets around the world, and for a good reason.

…has recorded a total of 39 players who have won more than $500,000 while another 16 players won over $1,000,000 since the game was first released. Following the success of the original, the brand quickly began work on a sequel and it has finally arrived!

The new game titled Da Hong Bao Gold is packed with interesting new features, including the 5 big win features. Namely, players who get 3, 4 or 5 scatter symbols can activate the Fortune and Dragon spin, Lucky Spin and other features that can potentially bring 8x, 18x, and even 888x the original stake. Needless to say, the new game is promising to be much more lucrative than its predecessor if the original game’s performance is an indicator.

In addition to the previous game, the brand has decided to give another immensely successful slot of theirs a do-over. Savanna King has become an instant classic in many markets, bringing the supplier lots of new users.

As a result, the company has decided to add Savanna King to its XL series of games. The new title will be familiar to the fans of the original but will bring new and exciting options for those who enjoyed the original’s gameplay.

Peyman Zadeh, Director of Products, offered a comment regarding the new releases: “This month’s releases were about celebrating the classic slots roots that Genesis was birthed from. To this day, Savanna King and Da Hong Bao are player-favorite games, attracting new players while retaining others who’ve been coming back time after time. In Da Hong Bao Gold, we kept all the goodies players love about the game intact while bringing a new feature and a new and improved UI experience. We’ve also brought Savanna King into our exciting XL series to bring higher volatility, higher reward game experience to the most iconic Genesis title.”

Genesis is one of the leading software providers in the iGaming industry. Specialized in creating innovative slot games, this company has quickly become a crowd favorite in several key markets around the world.

Players in for Real Treat with New 888casino Platform