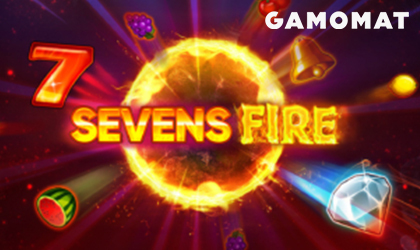 Gamomat, one of the world's leading providers of online slots and casino games, has just released its latest game called Sevens Fire. Players can enjoy spinning the reels for free or for real money, and there are plenty of ways to win big on this exciting new title.

Regular symbols such as watermelon, grapes, oranges, 7s, bars, bells, lemons, and cherries are displayed on the grid. The grid has 5 reels, 3 rows, and 10 active paylines. This title has an RTP of 96.13% which means that punters can expect more frequent payouts. The top prize might be worth up to 3,500x the wager, while the betting range is between $0.1 and $100. As for the bonus features, there are wilds, a gamble feature, wilds, sticky symbols, re-spins, an inferno bonus feature, and extra spins!

Another Title in the Fire Series:

Overall, it may be a good fit for someone who enjoys Hold and Win style re-spins. The traditional design and the modern elements look appealing together!

Senior Product Manager Gamomat Development GmbH, Philipp Schroedel, commented: “Sevens Fire is a game that I can say with great certainty will become an outstanding success. The game design and gameplay are excellent. We’re especially proud of the Fire Respin feature that players will also be able to enjoy within the other upcoming games of the fire series.”

Gamomat is a German firm that serves land-based and online casino games. The company's main goal is to further develop slots, jackpots, and, Maxiplay bonuses using its unique concept. It also operates its own online casino, which contains the same name. Its lobby of games is constantly growing, but its graphics may need a little tweaking to keep up with other providers. However, the special features and jackpots make them more appealing. The firm, on the other hand, maintains that it does not compete with leaders in the German iGaming industry market. Its content may be found not just in German but also in the USA, Canada, Eastern Europe, Italy, South America, and Spain.