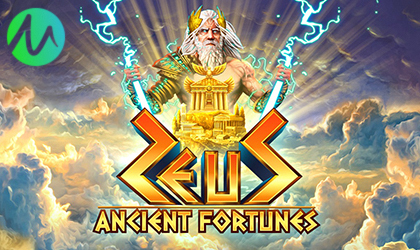 Greek mythology has always been a huge source of inspiration for various directors, writers and this time – developers.

We have seen a lot of Greek mythology-based games but it is always a pleasure to run into something new and refreshing. Today, we uncover more details about the latest slot powered by Microgaming.

Widely-known as thundery and sky god, Zeus will take players on an amazing journey where they will have countless opportunities to explore different features.

Have you ever heard of Book of Oz? The creative team from Triple Edge Studios developed this game, just like, Ancient Fortunes: Zeus.

They set a story inside the mythical realm of Mount Olympus where gamers will get a chance to meet the great Zeus and see how strong his powers are.

Furthermore, this slot comes with five reels and ten pay lines and is equipped with amazing gameplay mechanics that are going to keep you on the edge of your seat.

What Happens During The Game?

Microgaming wanted to shake things up by creating an unbelievable story.

Firstly, during the base game, you will stumble upon stone blocks that are about to fall and create a wall of Rolling Reels where spectacular prizes are waiting for you to collect them.

Each block is embellished with incredible artwork that perfectly captures a pantheon of gods, as well as mythological creatures.

If consumers successfully make a good combination, they will cause winning symbols to shatter, meaning that they will instantly get a preview of their splendid world.

And That’s Not Nearly All:

Moreover, if new signs fall into place, they will fill out the grid to give more opportunities for additional winnings!

Besides them, there’s a beneficial multiplier trail that builds up with every consecutive win and it can grant gamers with up to a 7x multiplier in the base game.

Certainly, the most exhilarating part of the game is when at least three lightning bolt symbols appear on the reels, transporting players into the temple of Zeus where they can acquire between ten and twenty casino spins!

Ultimately, if they succeed in landing a wild next to the slot spins character, they will earn up to fifty additional spins!

If all these details didn’t kick-start your imagination, nothing else will, so to those who are impatiently waiting for its release – the game was launched on Wednesday, 10 April.

“Ancient Fortunes: Zeus is a striking Greek mythology themed slot, expertly crafted by the team at Triple Edge Studios. Combining the Rolling Reels™ mechanic with bidirectional paylines gives the game an electrifying edge, amplified by a multiplier trail boosting potential wins. The engaging free spins feature, which can be retriggered, sees the action and wins soar, with a maximum 21x multiplier, offering big win potential. Rich in rewarding features and stunning visuals, players ascending to Mount Olympus are in for a truly legendary gaming experience.”

“We are delighted to part the clouds to reveal Ancient Fortunes: Zeus, set in the rich and enchanting world of Greek myth. The king of gods and gold takes centre stage in this premiere outing, featuring intricate hand-drawn artwork and an epic soundtrack that really brings the immersive realm of the gods to life.”