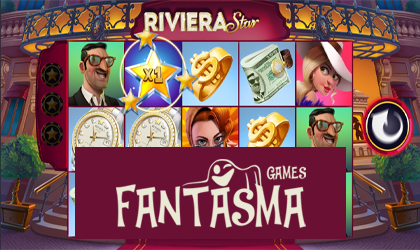 Fantasma Games, a young slot provider based in Stockholm, has announced the release of their latest game titled Riviera Star. The new game, ninth from this...

…company since it was founded in 2017, brings high-quality graphics, a catchy theme and most importantly, a set of interesting game mechanics to players worldwide.

A Taste of the High Life:

This latest release is all about that celebrity lifestyle, Riviera casinos and expensive jewelry. The creative team behind this game did a great job at…

…capturing the essence of this life with the immersive graphics, fun characters and an awesome soundtrack to tie it all together. Once fired up, the game takes players in front of a luxurious casino, likes of which you get to see in Monte Carlo or other prestigious locations.

It’s evening, and the lights from inside are spilling out in the streets, covering the red carpet and blasting the golden stair rails on each side of a wide staircase. The whole scene is set in a way that creates a feeling that someone very important is about to walk down that red carpet. That someone is you!

Players who decide to give this slot a try will be greeted with a number of interesting characters on the reels – one for each higher paying symbol. The lower paying symbols are nothing to scoff at either. Players will see all kinds of expensive jewelry, most if it gold plated.

The engine that drives all of this runs on a proven 5x3 grid design and 20 fixed paylines. As a result, the estimated max win players can look forward to comes in at 1975.5x the original bet.

As far as special features go, there is the Respin feature that locks down all winning symbols and respins the rest. This feature is active on every winning line, making this slot exciting…

...in its base game format. Next up is the Superstar Feature. Players lucky enough to activate it will see a Superstar symbol appear on reels 2-4 and act as a sticky wild. Lastly, there is the Bonus Spin feature that will yield up to 10 bonus spins once activated.

The game will launch exclusively on all Betsson brands on December 9, while all other participating operators will get the game after the global launch set for January 6, 2020.

Founded in 2017 in Stockholm, Sweden, Fantasma is one of the youngest software providers around. With that said, it didn’t take long for this company to make its presence known in the industry. They have managed to achieve this thanks to a small portfolio of very immersive games that have proven to be popular in both desktop and mobile casinos in several key markets.

As of right now, its team of 12 highly dedicated professionals is driving this brand forward, expanding their reach with the addition of new partners to their distribution network. So far, they’ve managed to include over 200 operators in this network.