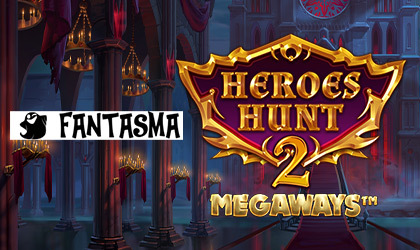 The title is built on 6 reels, 6 rows, and 46,656 active paylines. The RTP is 96.49%. When it comes to the betting range, the minimum betting option is $0.2, while the maximum is $50. The maximum potential win is 20,000x the bet, and this slot offers plenty of bonus features that will help players to generate wins more frequently. There is a hero feature that comes with modifiers, extra spins, wilds, scatters, super extra spins mode, multipliers, and 2 bonus buy rounds.

The latest title will join the Fantasma portfolio of exciting games which includes the recently launched Bounty Showdown, Golden Castle, Elemento, and more!

Fredrik Johansson, Fantasma Commercial Director, said: “Heroes Hunt is our most popular game launch of all time, so a lot of work has gone into Heroes Hunt 2 to ensure it takes the player experience to the next level. To do this, we spoke to operators, streamers, affiliates and players to learn how we could make the game even better and have then incorporated these improvements into the game. The result is a highly animated, narrative-led game that delivers high levels of entertainment to players while also building big win anticipation with every spin."

Fantasma Games is a Swedish casino provider founded in 2016 by an experienced team behind successful casinos such as LeoVegas and ComeOn. This company is focused on developing the latest and most popular casino solutions, and its games are licensed to use the mechanics of the Big Time Gaming engine. It released its first game in 2017 and has developed 20 games since then. It is a relatively young company in the iGaming industry and has yet to receive any awards, but you can certainly expect recognition in the future.