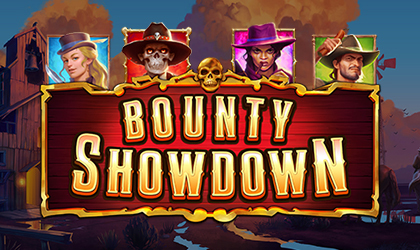 Bounty Showdown is a high volatility game that is played on a 3-4-4-4-3 layout where there are 576 active paylines. However, everything is concentrated in the bonus round, and due to high volatility, players should be more patient with this title. The Gatling multiplier wheel largely controls players’ destiny, where they can generate a maximum potential win of 13950x the bet. The bonus round can be purchased, directly from the main game. It will cost players 80x the bet, but players are guaranteed with at least 3 scatter symbols. Buying the feature also increases RTP from 96.16% to 97.11%. However, in some jurisdictions, this feature is not available.

The developer is excited to see players’ reactions and the brand is pleased with another great title in its library of games, which constantly grows!

Tianzhi Zhou, Game Producer at Fantasma Games, said: “The game punches hard and when it does, it’s a great result for the player. That combined with the classic Wild West graphics and music makes the whole experience feels just “right” for players who love classic slot games. This is another example of how we create games that go beyond gambling due to the engaging narrative that sets the scene for the action that takes place across the reels. This is a great addition to our portfolio, and we look forward to seeing players enter the bounty showdown.”

About the Swedish Brand:

Fantasma Games, a Swedish-based casino provider, was established by experienced people from successful casinos like LeoVegas, ComeOn, and Grin Casino in 2016. The company offers casino content through the Microgaming platform, and they already have partnerships with major casino providers such as Yggdrasil and Leander. This provider is committed to developing the latest and most popular casino solutions and its games are licensed to use the mechanics of Big Time Gaming’s engine. Therefore, it developed games such as Hypernova Megaways and Flower Fortune Megaways. It launched its first game in 2017 and has developed 19 games since then. It is a relatively young company in the iGaming industry and is experimenting a lot with 3D slots and testing VR. This slot developer has not received an award but can likely look forward to them in the future.