Explore the Mysteries Tombs in Gods of Gold InfiniReels 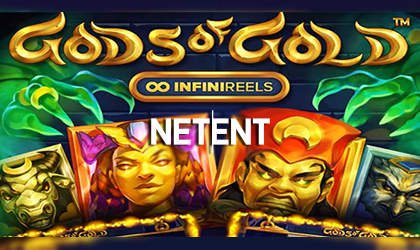 The latest creation from NetEnt is truly something special.

The Gods of Gold: InfiniReels not only brings a unique vibe with its…

…awesome theme, but it also introduces an all-new feature turns a standard slot experience into something else!

The Mysterious Vaults of Gold:

The developer is known for releasing highly immersive slots that can tell a story. The new title is definitely one such game. This adventure takes place deep underground, in massive yet Mysterious vaults that are overflowing with gold.

The team behind this release has invested a lot into the design of the game. The background is mainly static, but it’s detailed enough where it can capture one’s gaze for a moment or two. This is one of those slots where all of the good stuff, both visual and potentially lucrative, happens on the reels. The symbols design is simply exquisite.

…feature all kinds of deities. As expected, gold is the prevalent color while the entire game has a very exotic vibe to it. The audio design adds to this with its Middle Eastern flavor.

The slot features a 3x3 reel grid in the base game. However, this is no classic slot. The InfiniReels mechanic has taken care of that.

Namely, every time a…

…spin ends in a win, one more reel is added to the right-hand side. This will keep happening as long as players are winning. Needless to say, there’s immense potential in this mechanic alone.

Then there are special features. The supplier has taken a regular bonus spin mode and spiced it up. The Win Spins are triggered by 3 scatters, and guarantee a win on every spin. There’s also the Multi Slam feature that adds 2-3 reels at a time during a winning spin, and the random Respin Feature.

Bryan Upton, NetEnt Director of Games, said of the release: “Gods of Gold: InfiniReels™ is a major release in our roadmap and is the perfect game to premiere our infinite bet ways concept – a mechanic which we have big plans for over the next year. We can’t wait for players to experience the excitement of InfiniReels™ and hope the mechanic will become a true fan favorite of our portfolio as we continue to explore its full potential.”

NetEnt entered the iGaming industry over 20 years ago, making it one of the oldest players in the game. Over time, the company grew to become a true authority in all things slot related. Aside from gaming content, it also offers a whole variety of tools designed to give operators more control over the content they serve to players.