Explore the Lost Tombs in Vaults of Anubis by Red Tiger 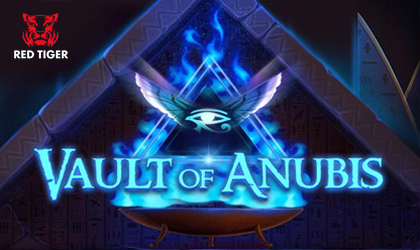 Red Tiger Gaming is announcing the release of its latest slot game titled Vault of Anubis.

As expected, the game takes place in ancient Egypt and is another…

...title that delves deep into the mysteries of Egyptian pharaohs, all kinds of deities and more! However, the developer applied its own spin on this one-armed bandit game.

It’s that time of the year when Egyptian-styled slots are hitting the market. Red is the latest provider to get on this action with its latest release.

However, compared to most other…

…games of this type, this title brings a much more visually engaging experience. The went all out with the graphics and animations.

As a result, we’re treated with a game that is…

…combining the usual ancient aesthetic with a modern, almost alien-like vibe that is felt throughout the game. The scenery puts players in front of a massive entrance to a tomb. There are two statues of Anubis on each side of the reels, standing guard over what hides within.

Symbol design is all about the well-known iconography that is often associated with Egypt. We’re talking the Eye of Ra symbols, Anubis statues, and scarabs among others. The lower paying set comes in the form of very different looking card suits.

A Plethora of Features:

What makes this game stand out even more than its graphics are the features it offers. This slot game is running on a 7x6 reel grid and uses a cluster system instead of regular paylines.

As far as special features go, players can…

…expect Super Symbols that come in 2x2 or 3x3 formats. Then there are the Vault Spins that bring potentially unlimited multipliers.

Director of Business Development at Red Tiger, Carl Ejlertsson said: “With immersive game-play, picture perfect graphics and a dramatic soundtrack, players daring enough will be rewarded with a thrilling experience when they enter the Vault of Anubis. The game’s popular theme and mechanic, coupled with the opportunity for a max win of 5,000x the stake, makes traveling back to ancient Egypt an adventure that’s truly worth experiencing.”

About the Software Provider:

Red Tiger is one of the leading software studios in the iGaming industry. The company was founded in 2014 by a group of industry veterans who were looking to improve the state of the iGaming in their own way. Over time, the brand started standing out with its innovative features and games that were packed with awesome graphics.

The attention to detail and quality of content landed the brand on NetEnt’s radar. In fact, the industry giant acquired Red Tiger in late 2019.