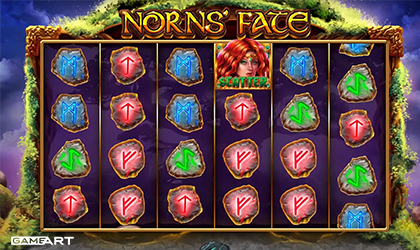 GameArt, one of the most well-known digital gaming providers added another work of art to its colorful portfolio. Portraying one of the eternally inspirational topics, the enthusiastic team produced the 30-payline slot Norn's Fate.

Taking punters to the mythical and mystical world of Nordic legends and runes, the game introduces them to one of the richest folklores in the world. Besides being visually superb, the slot is equipped with a selection of various features, making the entire gameplay highly unpredictable.

Three Norns, each of a different color, act as scatters in the game. Based on their color, each of them is seen bringing a fine number of extra spins either in Past (green), Present (red) or Future (Blue).

Among the main characters…

…and valuable icons as well you will also meet Norse God Odin, who symbolizes wisdom, poetry, death, divination, and magic, and acts as Wild in the game. Appearing on the reels, he reveals the rune icons and converts all the matching symbols on the reels to Wilds. If more than one Odin hits the reels during the round, each one will reveal a different rune.

During the feature with added spins, all Norns become Expanding Wilds, on reels 4, 5 and 6, while Odin acts as a regular Wild on 1, 2, and 3.

Those among you willing to take the challenge to another level…

…and see what Norns have prepared, there’s a red or black card gamble feature. This option gives you the chance to double winnings up to 5 times.

Sneak Peek Through the Portfolio:

The supplier’s collection may not be the most massive one you can encounter while exploring versatile content producers, but the team most certainly stands to the name they bear- their games are true art! Each of their titles, including this one, brings beautifully-designed and memorable characters, gathered in an actionable story.

Pirates are among the most inspirational topics…

…but instead of bringing a bunch of noisy rum-drinking male buccaneers, they brought the tale of Queen of the Seas. Brave enough to sail the most dangerous seas, this breath-taking, but the notorious lady is eager to plunder thousands of ships and fill those treasure chests with the shiniest gold to be found.

We all love circuses, you will agree, but on the other hand, clowns are often referred to as one of the scariest beings ever. So, is there a better place to gather the most horrifying creatures than in the Circus of Horror, which is exactly what this developer did.

Have you ever thought about discovering Tierra Azteca, taste red-hot peppers, and tequila, meet some flamenco dancers? If so, then Chili Quest, with its numerous features and colorful symbols can take you right there.