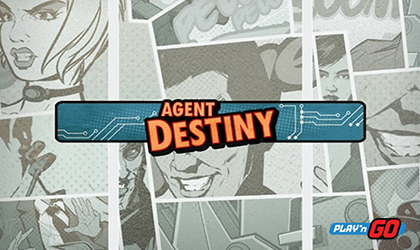 Play’n GO, one of the leading software providers in the iGaming industry, has announced the release of its latest slot game titled Agent Destiny.

The game revolves around espionage…

…and gives the player a taste of the cloak and dagger world in a fun way. Aside from its interesting theme, this game also brings several potentially lucrative features!

The developer has been on a roll with releases for 2020. The company has set a busy schedule and is keeping with it. Their latest contribution to the world of iGaming conjures up a thrilling pulp fiction adventure that will impress the fans of the genre. The game is the ultimate treat for those who spent evenings reading all kinds of pulp fiction comics and watching movies from the ‘50s or ‘60s.

The entire game is designed to match this aesthetic. As a matter of fact, the release serves as one of the most unique looking games to hit the market in recent years.

The team behind the brand was…

…heavily influenced by comic books when they designed this game. The background is static and depicts various characters drawn in numerous panels.

However, it is the stuff that happens on the reels that truly makes this game attractive. Namely, the symbols come in two tiers. There’s the lower-paying tier represented by the usual card royals and the higher paying tier that is all about various characters from this story. The quality of symbol design is impressive, to say the least.

The 5x3 reel slot runs on 20 paylines. Once you go past the base game, you’ll quickly learn that the awesome theme is not the only non-standard thing about this game.

Johan Törnqvist, the developer’s CEO, said: “If you want to make the most entertaining games, you need to consider the whole experience, that’s what we do. Agent Destiny is not just a fun game to play, but also recapture the fun and excitement of the spy adventures the game is based on. Design, sound, features; all elements must come together to create a slot that captures the player’s attention and immerses them fully while they play.”

Play’n GO is arguably one of the largest slot game specialists in the industry. Their games are packed with awesome features and often innovative technologies. The company is working with top tier operators in some of the most contested markets in the world