Experience the Tale of Prince Arthur in Avalon The Lost Kingdom 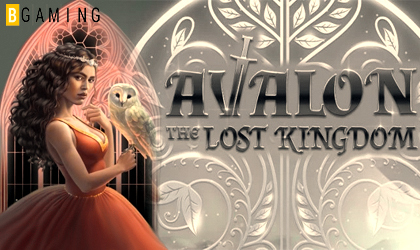 BGAMING, a software provider based in Belarus, has dropped a new game that is all about bringing the tales of the old back to life.

…their latest release is packed with magic, awesome features, beautiful fairies and much more! Fans of the medieval slots are in for a treat.

The latest game brings back the tales of valiant knights and magical creatures. It is all about the legend of Avalon – a magic island of Arthurian where wounded spirits would be healed and bodies mended.

Arthur, the ruler of the lands, got injured in battle and was brought to this magical land looking for another chance. There, he met two beautiful fairies – Morgana and Mizuilina. This is where the game takes off.

Players are presented with a relaxing theme. The scenery takes place in somewhere in the wilderness of Avalon and depicts a massive, ancient stone that houses the reels. Everything is covered in moss and fog, giving this game a somewhat mysterious vibe.

Symbol design features the standard card royals in the lower-paying set, while the higher paying set depicts all kinds of medieval treasures, swords stuck in stones and of course, the main characters.

Features to Match the Story:

The new release runs on a 5x3 reel grid and a total of 20 fixed paylines. Although this makes it a relatively standard slot, the developer’s creative team decided to include a variety of special features in order to spice things up for players.

For starters, there is the bonus spin mode that can be retriggered. During the bonus round, players get to choose their favorite character from the bunch, activating the Fateful Wild feature.

The bonus spin mode also brings progressive multipliers that start at x2 and can go all the way up to x7. Overall, the game brings plenty of potential for players to win big and experience a thrilling slot adventure.

BGAMING is a software studio located in Belarus that is specialized in producing cinematic slot games and other content for the iGaming industry. The company was founded in 2012 as a part of SoftSwiss. It wasn’t until 2018 that the company became known under its own moniker.

With a talented team of professionals at its side, the supplier was looking for ways to improve the overall slot game experience. They have recognized that introducing innovative features, math models and using high-quality graphics was the way to go. As a result, it is slowly becoming a household name in some of the most important regulated markets around the world.