Experience the Horror in Million Dracula by Red Rake Gaming 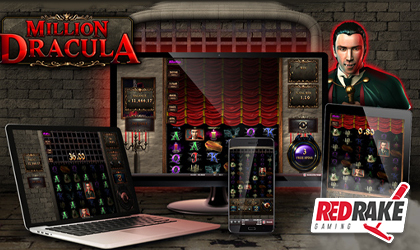 Red Rake Gaming has prepared a horrific summertime hit for its fans with the release of Million Dracula.

…sharp teeth, creepy castles, and potentially lucrative prizes that await those lucky enough. Explore the dungeons and reap the rewards!

The developer continues to defend its reputation of being one of the more innovative slot game providers on the market.

The company has just released a brand-new title…

…that brings a very dark but entertaining theme to the reels. If you’re a fan of vampires and classic horror in general, you’ll love this one.

As the game loads up, players will find themselves in a dark, damp dungeon that sits deep within a medieval castle. The background consists of a stone wall and a massive iron drop gate in the middle.

The absolute darkness beyond the gate…

…gives off a feeling that something is lurking in the shadows just beyond the reels. Symbols come in the form of colorful card royals in the lower-paying set while the higher paying set features all kinds of candles, demons, and other horror-inspired iconography.

Of course, the whole package is topped off with a soundtrack that perfectly complements the loom and gloom of this underground dungeon.

This latest title is not your usual slot game. This game features a 6x10 reel grid that runs on the MillionWays mechanic.

In other words, there are exactly a million ways to win…

…in this release, making it one of the more thrilling games to hit the market so far this year. As far as special features go, the supplier went fairly light. That’s perfectly fine considering the volatility of the base game.

However, there are still…

…a few options available. Players can enjoy the classic duo of expanding wilds and a promising bonus spin mode. Overall, the game maintains a great balance of features, allowing players to potentially score big without too many complicated bells and whistles.

Red Rake is a premier software provider that is known for its highly immersive slots. The company was founded in 2011 and has mainly worked in the social casino side of the business. By the time 2015 rolled by, its team decided to delve into the real money side of the iGaming industry. It didn’t take them long to become a recognizable name and popular business partner. As a result, it works with some of the top-rated online casino operators around the world.

Fans of this company’s games are used to its busy release schedule that leaves them with something new to look forward to every month.