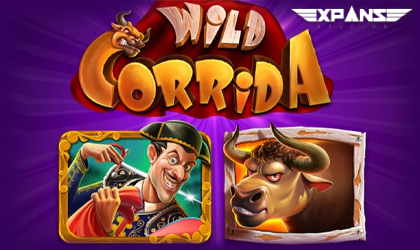 Expanse Studios has released a brand new video slot, where action takes place in famous Spanish arenas, where a matador and bull are fighting for their lives. The Wild Corida slot is an exciting adventure full of bonuses and features that are waiting for punters to press the spin button and start the battle for enormous wins.

As mentioned before, the adventure is about bullfighting tradition. Many people find the sport extremely offensive, nevertheless tradition is active in Spain, mainly Seville, where it was initially established. The old, traditionally themed video slots are inspirational for game designers, but this developer’s latest launch is something unique.

About the Game and Features:

The slot has a 5x4 grid and 178 active paylines. The design and graphics are impressive and the creators have done a really good job here. Everything is displayed in HD quality, plus the soundtrack matches the game atmosphere perfectly. Players will feel like they are present in the arena.

The game has different wilds. The Golden Bull is a replacement for all symbols but not the Bull Wild and the Scatter Matador. During the base game, the wild appears only on reels 2, 3 and 4 and during all other features, it can land anywhere.

Wild Bull can also become a walking wild and is a substitute for all other symbols except the scatter, and it provides extra spins if it lands on reel number 5. Three matador symbols will award 3 extra spins. The title also has an RTP of 96.30%.

Expanse Studios was founded in 2019 as a young company with lot of knowledge. The company has headquarters in Malta, the epicenter of land-based and online casinos.

The company has quite an active release program, but the general quality of the games is at the highest level. Its products, video slots and table games have an excellent graphic design and audio tracks.