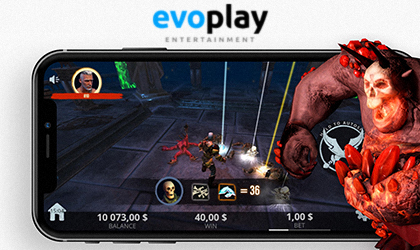 Being creative and innovative in the gaming industry is extremely important due to the fact that players are always looking for something new and refreshing. With developers like Evoplay Entertainment, creativity and uniqueness is never a problem.

What Do They Have In Store For Us?

An exciting video slot is finally available for play and it’s something we haven’t seen before. Namely, Dungeon: Immortal Evil is the first RPG (role playing game) inspired game. What’s interesting is the fact that it was made for those users who love to play their favorite reel slots via mobile device.

Furthermore, Evoplay wanted to spice things up by allowing players to become the game’s hero, with a third-person fully 3D camera monitoring their virtual adventure continuously.

Notwithstanding, they wanted to launch something refreshing when it comes to the gaming industry, they have still stayed true to the classic version of video slots, meaning that both losses and wins are RNG-based.

This means that no matter how skillful or experienced someone is, if they do not have enough luck or the RNG algorithm is not on their side, they will not be able to finish the game with a satisfying result.

Features To Drive You Crazy!

The first one that is going to add more excitement to this game is a Mystery Loot feature. Each spin represents an entire new journey through various levels during which players will bump into creepy enemies.

Mystery Loot is one of the reasons gamers must simply try out this video slot because this bonus round is what makes this game incredibly special and extraordinary!

Surely the most thrilling part of this game – the Bonus Achievements during which users must go through different Dungeon spaces, and once again, defeat fearless enemies who are here to keep the final level’s Boss safe.

Finally, the thing that is going to stimulate gamers is the RNG-determined prize that is part of every single bonus level. All these prizes are equal to money and if players are lucky enough during each round, they will be bestowed with a chest with a huge selection of weapons, health potions, armor upgrades, etc.

Ultimately, the culmination occurs with an outstanding boss fight during which users have the opportunity to receive a bet multiplier of up to 5000x!

All in all, this is very enticing and engaging game, definitely a breath of fresh air when it comes to slot machines. We are not sure when it is going to be released but we are certainly looking forward to it!