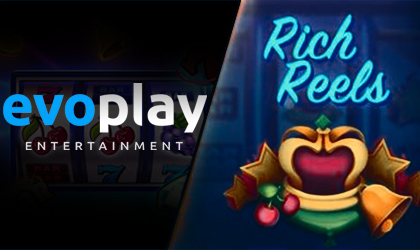 Evoplay Entertainment has just broken the news that it will be releasing a whole line of slot games inspired by the old school Vegas-style games.

The new slots will appeal to players who are nostalgic about the old one-armed bandit games but also promise to introduce some exciting features.

The supplier has revealed plans to launch a whole catalog of retro games in 2020. The entire series of slots that make this catalog is inspired by Vegas classic slot games.

…has already announced the first two titles of the series – Rich Reels and Irish Reels. Both games are perfectly capturing the essence of the entire series. The developer has managed to capture the core of Sin City’s entertainment in a way that combines modern features with an unmistakably retro feel.

Rich Reels is packed with awesome visual effects that include over-the-top details such as coin showers and more. This particular slot comes with two types of Wild symbols. Players will get to experience the Crown and Star wilds, each offering x100 and x250 multipliers respectively.

Those who are looking forward to the St. Patrick’s Day will absolutely fall in love with the Irish Reels and its potential to bring x800 the original bet to lucky players.

Ivan Kravchuk, CEO at Evoplay, offered a few words regarding the whole series: “At Evoplay Entertainment, we’re all about capturing the attention of an ever-more demanding global audience. Packed with everything that makes a Vegas slot great, our Reels series has been designed to ensure our operator partners are able to offer that legendary gaming experience anywhere in the world. Flawlessly adapted for mobile, each one of our series is guaranteed to bring our famous trademark of action-packed excitement, along with beautifully designed graphics and immersive gameplay to ensure that Nevada is as close as a swipe on your phone!”

Evoplay is an innovative software studio that is focusing most of its efforts on developing 3D slot games. The team behind this brand is also working hard on implementing VR technologies into the world of iGaming. With that said, this company also offers a number of classic games that have proven to be highly successful in various key markets around the world.

For a young company that joined the industry only a few years ago, it is making leaps towards becoming one of the driving forces behind innovation. So far, it has accumulated a number of top tier operators within their network, who have recognized the potential this company brings to the table.