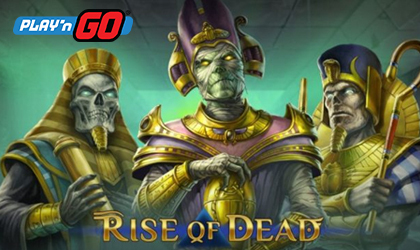 Play’n GO has released a new slot game inspired by the undead. This horror infused experience brings interesting features as well as a…

…captivating theme that will keep players at the edge of their seats.

The Tomb of the Undead:

This latest adventure from Play’n GO takes players deep into the world of the dead. With a high-quality theme, their latest title offers a different take on ancient Egyptian mythology and aesthetic. This slot takes place in an ancient Egyptian tomb with hieroglyphic inscriptions covering the walls. The cold chamber is dimly lit by several oil lamps that project a greenish hue over the sarcophagus sitting in the middle.

Such high-quality graphics set the mood for what is promising to be a very immersive gaming experience. The reel and symbol design follow the same creative path. The team behind this game has used the standard card royals deck for the low paying symbols while the higher paying ones feature three…

…undead pharaohs. The latter are also animated, which brings these characters to life.

Base game mechanics are rooted in the standard 5x3 grid with 20 fixed paylines. In other words, players will be able to win up to 5000x their initial bet.

With that said, there are several special features offered as well. Mega Stacks is a base game feature that involves one normal, randomly selected symbol that is chosen to fill 12 consecutive spaces on every reel.

The next feature is the Ancient Bonus Spins mode. Triggered by 3 scatter symbols, this mode rewards players with 10 bonus spins.

The supplier has also included the Gift of Gods feature that is randomly triggered during the main game. This feature takes a symbol and matches it across reels 1,3 and 5 while reels 2 and 4 are spinning as normal.

Johan Törnqvist, CEO, gave the following statement: “Egyptian history and mythology is a very popular subject matter be it in films, TV or games. We always aim not only to do justice to the source of our games inspiration but also to bring a different element to it, something that people may not be familiar with or haven’t seen before. It’s this that separates our games from many others in the market at the moment and is a testament to the creativity of the company when it comes to creating entertainment.”

Play’n GO is a Swedish-based software provider specializing in providing the market with high-end, innovative games. Founded in the mid-90s, the company started out small, only to quickly grow in size as their services expanded. The developer is currently employing a massive team comprised of talented individuals in different countries of the world. They are among the most respected providers in the industry among players and B2B partners alike.