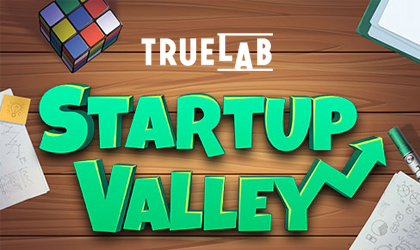 True Lab, an up and coming software studio that is making a name for itself, has published another game!

This time around they…

…have taken on the startup culture with Startup Valley. The game call players to join up and help the team of bootstrappers to get their business going!

Grab the Investors by The Horns:

This latest game is all about the entrepreneur culture and the startup phenomenon. As the game loads up, players get to meet five young entrepreneurs. They’re smart, they’re gassed up with energy drinks and they are ready for that IPO to happen!

The team behind the game went with a bright-looking scene that mostly takes place on the company table. The reels are nestled in a stack of papers while the surroundings are full of markers, schematics, pie charts and other things one would expect to find on the meeting room table of a young startup.

However, the scenery changes once players trigger certain in-game features.

When that happens, the reels move to a…

…whiteboard where the background gives you a better view of the company offices. Symbol design is all about items that define a modern tech startup. Players will see slices of pizza, coffee mugs, laptops absolutely covered in stickers and even rocket ships.

Last but not least, this slot packs a pretty lively soundtrack that adds to the whole techie startup vibe.

The 5x3, 15 payline slot pays left to right and requires 3 symbol combo at a minimum. Aside from an exciting core game, there are also several special features worth mentioning.

Namely, each of the…

…five characters is associated with a single reel. Once the Experience symbol lands on the reel, the character gains 10 EXP points. Those who collect 100 EXP points will trigger that specific character’s Solo Bonus Spin mode.

Vasily Polynov, True Lab’s CBDO, offered his insight on the new release: “With a set of cool features and its signature visuals, Startup Valley is an ultimate slot game that will fit nicely into our 2020 roadmap. The Buy Bonus feature makes it attractive for an even broader audience."

True Lab is a company specialized in producing and publishing immersive slot games that offer something different to the market. Founded in 2016, it didn’t take long to create a name for itself as one of the more innovative providers to join the industry in recent years.

Startup Valley is the latest game in its limited but growing portfolio. With that said, the brand has more than 10 new games in the pipeline, getting ready for release later this year.