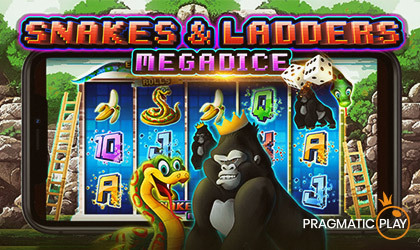 Snakes and Ladders Megadice is a title developed by Pragmatic Play in collaboration with Reel Kingdom Studio. Players will enter a dense jungle to fight for prizes to a location swarming with snakes, one of which is enormous and has coiled around the grid. However, it isn't nearly as frightening or dangerous as the Snake, therefore, players will have a fantastic gaming experience.

There are 5 reels, 3 rows and 10 active paylines. The minimum betting option is $0.10, while the maximum betting option is $100. By default, the RTP is 96.68%, however, it can vary by platform. The volatility of Snakes and Ladders Megadice is high and the maximum potential win is 5300x the stake. The list of bonus features includes wilds, multipliers, Snakes & Ladders board bonus, bonus symbols, and extra spins.

The Ultimate Gaming Experience for Everyone:

This game follows recent popular hits from the provider, such as Might of Ra, Elemental Gems Megaways, and The Ultimate 5, and there is no doubt that the title will capture player's attention!

Pragmatic Play Chief Business Development Officer, Yossi Barzely, added: “Snakes and Ladders Megadice™ blends all the joys of playing classic board games with the action and excitement of modern gaming experiences. We are thrilled with how the aesthetics and bonus features have combined to create such a multifaceted experience for our players, and hope that the feedback reflects the hard work that went into the development process.”

Pragmatic Play was founded in 2013 and the company's offer quickly reached over 100 well-known gaming sites around the world. A significant part of its success was joining the Novomatic Group in 2014, as well as access to its third-party operators such as Greentube. The brand was initially concentrated on the Asian market, and in early 2015, it moved to the United Kingdom and opened its studios in London. The brand offers over 350 games with a variety of innovative themes, all compatible with HTML 5 technology. All games created by this provider are available on different platforms and devices, which means that their games can be played on different platforms including Android, iOS, and Windows. Today, it operates under licenses issued by the Malta Gambling Authority and the United Kingdom Gambling Commission.