Enter 2019 With A Superb Reel Slot By BGaming 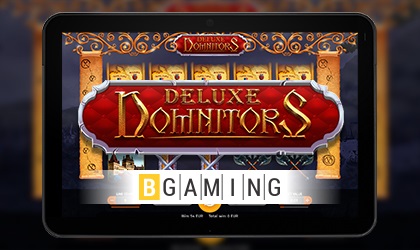 Medieval themes have been frequently used by many software providers due to their interesting and somehow enchanting stories that revolve around them. This time, BGaming, a major software developer decided to end this year with a superb video slot called, Domnitors Deluxe.

Are You Ready For The Battle?

As in most cases, this slot also involves a battle, revolving around the pain and struggle that hit three principalities: Walachia, Moldova and Transylvania. Everyone, including the player, must be ready to use the weapon to fight against the enemies and at the same time defend themselves. In order to find out the final outcome, you first must spin the reel of course.

More About The Story:

As you’ve already assumed, the story takes place in medieval Romania, a period of time when horrific battles, wars, awful rulers, yet wonderous castles were the main hallmarks.

What we especially like about this video slot is how its developers made an effort to perfectly depict what is going on. Anyone who is a fan of this epoch is going to instantly fall in love with it.

Moreover, the music that goes in the background is even more majestic and we completely drag you into the story.

What About Its Features?

As expected, this video slot has really nice features. It is equipped with scatter and wild characters. Namely, a map of Romania and Vlad the Impaler stand for them in this title.

The most alluring feature of this game is surely the bonus round during which you must choose the suit of a card. If you pick the right one, you will instantly increase your earnings, however, if you make a mistake, you could potentially lose everything!

Six years ago, this leading software developer started their story. When their product director, Alexander, wrote some lines of code, that changed things in a positive direction.

At first, they became the foundation of SoftSwiss, one of the greatest online casino management platforms you can find today.

Then, they started making a portfolio filled with high-quality Full HD online casino games. This didn’t just happen in one day. For a long period of time, they were developing a team of extremely capable and talented people. Their creativity and drive were the things that made this company so strong!

Today, in 2018, they are working even harder, in a fast-paced tempo, therefore, it’s no surprise that spectacular results are achieved.