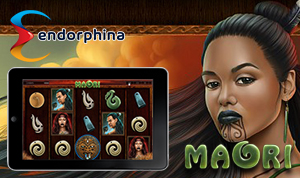 Endorphina has just unveiled a brand, new slot game! It serves as the final game release of 2016, having launched on December 26th, allowing the year to come to an end with a big bang. Its latest slot, titled Maori, was created with celebrating the heritage of New Zealand's Maori people in mind. For those who are not familiar with this particular group of people, they are an indigenous Polynesian group residing in the country, and first settled there sometime between 1250 and 1300 CE.

Enough about the theme, let's get down to the brass tacks of the game. It is made up of 5 reels, and 9 paylines, with opportunities to benefit from bonuses. The icon which will substitute for other symbols during play, also known as the wild symbol, is easily enough represented by the one which reads 'wild' across the front. To give the average wild a unique kick, any win the symbol contributes to will be doubled!

The slot is also equipped with a scatter symbol. The decorative mask will act as the scatter, and landing three or more of these on the screen at any given time will result in a spectacular bonus round warranting unlimited free games. It’s not quite that easy, however. There is one small catch. In the event that the blue sun symbol appears during the free games, the round will come to an end. Otherwise, you're in the clear. Green or red suns, on the other hand, award 2x multipliers.

As if the prospect of unlimited free games wasn't enough to sell you on this latest title, it does have one final trick up its sleeve. In fact, it offers players a risky gamble feature. If you come across a win combination on the reels, you will have the opportunity to double your prize, while accepting the risk of losing it altogether.

Enter the Ancient World with Glory of Egypt from Endorphina

Experience The Power Of The Cyber Wolf

Try Your Luck with Lucky Cloverland from Endorphina