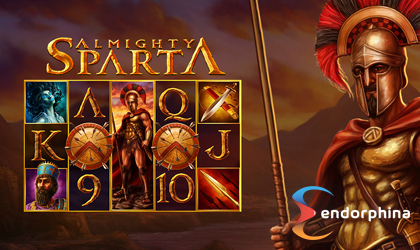 Through history, movies and books, we’ve all learned how powerful Sparta is and we don’t want to mess with it. Now, in the latest slot machine produced by Endorphina, players will get the opportunity to be in the shoes of the most courageous men in the world. How does it feel?

Be On Their Side!

Those who know their story are probably familiar with the relationship they had with Persians and how these soldiers fought against them, led by Spartan King, Leonidas, in the widely-known Battle of Thermopylae.

This jam-packed video slot perfectly depicts the entire story and how King Leonidas prepared for the battle against the fierce Persian army, knowing what he was getting himself into.

In case you didn’t know, before the battle, he visited the Oracle of Delphi and witnessed a really shocking prediction: “Oh, Holy King! You are going to die on the battlefield. Your entire army will die with you. That will be a frightful battle but worthy defeat!”

Leonidas knew what to expect but he calmly accepted his faith, choosing only those men who already had sons to pick up where they left off. When that horrifying day arrived, they truly fought like real heroes. They faced their enemy whose army unfortunately outnumbered their own.

Everyone believed that positive vibes would be on their side and that they would have the chance to beat them; but it turned out that destiny was rooting for the opposite side. Cunning Ephialtes wanted to grab something valuable so he showed his soldiers the way around Thermopylae, which enabled them to stab Sparta in the back.

As mentioned earlier, this story and the entire war between these men inspired a lot of creative people to pay tribute to them by either writing, directing or in this case, developing something in correlation to this topic. It looks like Endorphina was also hugely inspired by them.

Let’s learn some basic things about this game. It consists of ten pay lines, five reels and three rows. The graphics along with other elements of this game were executed so good that players will almost instantly be dragged inside the story.

Symbols were also nicely done. Users will come across well-known Spartan shields and weapons embedded on the reels, Leonidas, Xerxes, Oracle and Ephialtes, The icon representing the king is actually the wild symbol which serves as a replacement for all others, except for the scatter.

Finally, the game comes with free games, but in order to activate them, players must land at least three scatters – the spartan shield. Upon doing so, 20 free games are awarded.