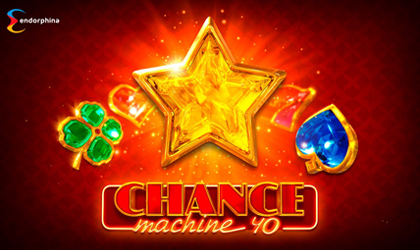 When it comes to the royal crown, there are many gems. Each piece shines with originality and class in the Endorphina Chance Machine 40 Slot. While playing this aristocratic slot machine, players will sense a royal atmosphere.

The game is based on a 5x4 grid with 40 active paylines. Game volatility is still unknown but an RTP of 96% is pretty sweet and is above average. The betting range is huge, and starts from $0.4 up to $400, which fits even the most demanding players and the maximum payout is 3000x the bet. This game will draw players into a sophisticated and respectable environment where there are no failures, only comfort, jewels, treasures and big wins.

The Crown is a wild symbol that appears on reels 2, 3, and 4 and replaces all symbols and expands vertically to complete the winning combination. Two different scatter symbols are available which are counted, no matter where they appeared on the grid. Players can also place bets in a Risk Game by choosing one of the four cards presented on the table. This gives punters the opportunity to increase winnings up to 10x the bet. If the dealer wins in any round, the risk game ends without any awards, but if the chosen card beats the dealer's card, the payout is doubled.

Endorphina’s CEO, Jan Urbanec, commented on the new release: “Since our Chance Machine series has been gaining great popularity among Endorphina players, we’re following up with a worthy continuation – Chance Machine 40! It’s those small and careful detail changes that deliver a great and polished game.”

Endorphina is a reputable, well-known and premium online casino software provider that has been in the industry for over a decade. This company is based in the Czech Republic and has already made a name for itself with its cool video slots. They have modern features, really good graphics, and some high bonuses and features that definitely set them apart from the competitors. For the players who are familiar with the provider’s games, it becomes apparent that the company's main focus is on making games of the highest quality, filled with stunning 3D animation. The company was able to expand its influence thanks to collaborations with Pololo Gaming and XIN Gaming, which helped them grow and spread into more international markets, mainly in the Asian market.