Endorphina Goes for the Top with 2020 Hit Slot Release 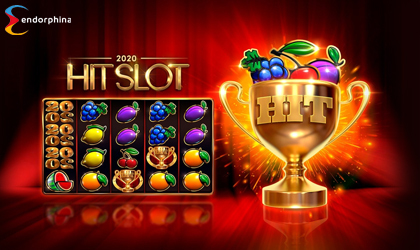 Endorphina has just released a slot that is aiming for the top! Titled 2020 Hit Slot, this new game is all about giving players the best chances to win in an old-school environment.

The game offers simplistic aesthetics as well as a thrilling special feature for those who are feeling lucky!

A Combo that Never Disappoints:

The developer is looking to seriously challenge the industry with the unveiling of their latest release. Aesthetically, the game is a combination of old-school classic slots, classic fruit slots and modern design.

The creative team behind this release went with a dark red color that’s often found on red carpets and fancy casinos. They’ve managed to create a sensation of luxury by simply using one color. The rest of the theme is pretty simplistic. With the reals covering most of the screen, players are encouraged to focus mainly on what happens on the reels.

As for symbol design, the creator went down the classic route. Instead of dividing the symbols between card royals and theme specific symbols, they went with tried and tested fruits. Every single icon on the reels, aside from the 20s symbol, scatter and wild, comes in the form of fruits.

Classic Gameplay with a Twist:

This being a relatively retro-style slot means that there aren’t too many special features. After all, the whole idea behind classic slots is to reduce the game to its core mechanics. This one does, however, include one special feature aside from the standard wilds and scatters.

…expect to activate the Risk Game feature! This game mode is pretty straight forward – players can choose to gamble their win in a simple coin toss game only with cards. The objective of the game is to beat the dealer’s card. By doing so, the stakes are doubled.

Players can double the original bet up to 10 times, potentially winning massive amounts this way.

Details on the Software Brand:

Endorphina is a growing games development studio from Prague. The company consists of iGaming professionals who understand how the market breathes, allowing them to release proper hits like the one in question.

Speaking of releases, the developer is leading the pack by creating and launching at least 12 games every year. Such a busy schedule and dedication to quality has allowed this company to become one of the favorite sources of iGaming software in recent years. As a result, this brand has formed a large network of distributors.