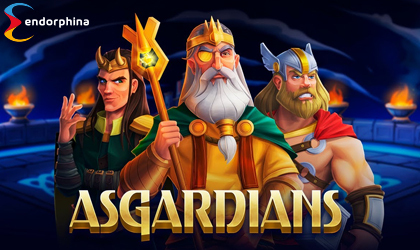 One of the leading software providers and slog game specialists, Endorphina, has announced the release of a new slot game titled Asgardians.

The game is focused around Norse mythology and…

…brings some of the most memorable characters from these legends. Aside from an awesome theme, the title also packs quite a balanced set of features.

Into the City of the Gods:

Asgard is one of the holiest places in Norse mythology. It is the city of the gods, ruled over by the all-powerful Odin, his son Thor and the, of course, Loki.

This developer is the latest…

…company to tackle this legend and bring it to the reels. The way they’ve chosen to do it is pretty balanced. The game features a static background that depicts some sort of a balcony overlooking the city of Asgard.

There are Norse runes everywhere, which only adds to the overall atmosphere. Symbol design is predictable but refreshingly well done.

…the higher-paying tier consists of Thor, Loki, Odin, and a Valkyrie. Loki is also the wild symbol, which is a nice little pun seeing how he is the god of mischief.

The new title follows the usual 5x3 reel grid pattern that runs on 25 paylines. This slot is fairly tame when it comes to special features as well.

First in line is the Bonus Spin mode. Players can trigger this mode by drawing 3 or more scatters. Doing so will grant them 10 bonus spins.

…in this game mode. Next up is The Forge feature. To activate it, players will have to get 3 or more Bonus symbols one after another. It’s a fun feature that works in Mjolnir into the game.

Last but not least, there is the Risk Game. In other words, players are given the opportunity to gamble their winnings on a card game. Depending on how successful one is, there’s a chance to double the winnings up to 10 times!

Endorphina is among the most successful slot game providers to join the industry. It was founded back in 2014 and has since been making headlines thanks to its awesome games. The company takes great pride in delivering 12 brand new games per year.

That kind of commitment has attracted numerous online casino operators, most of whom have become a part of the brand’s distribution network. This company’s success is attributed to the dedicated team of professionals who are working around the clock trying to come up with new ways to entertain their fan base.