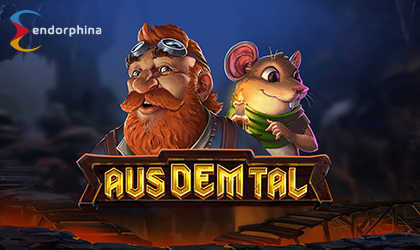 Endorphina, an innovative slot game developer, has just released an exciting new game titled Aus Dem Tal. This awesome looking slot is all about digging deep and retrieving valuable treasures from the deep.

The new title sports an immersive theme and a bunch of cool features that make this whole experience very interesting.

Riches from the Deep:

This month’s release for the developer puts them ahead of the competition when it comes to the release schedule alone. With that said, the game is the second of the three titles that were planned to hit the market this month.

The game is all about a dwarf and his little helper who go deep into dark mines in search of awesome riches that await below.

The background depicts a damp mine that is riddled with shafts and scaffolding that connects all of the entrances. Everything is illuminated by candles and torches, giving the whole game a warm, orange glow. Additionally, it is animated, although animations are mostly centered around the flames that come from below. Symbol design features various types of ore that represent the lower paying set.

…set comes in the form of pickaxes, miner’s helmets and other items you would expect to find in a mine.

A 5x3 grid and 20 fixed paylines make up the game. It offers a limited number of special features. Players can look forward to a simple bonus spin mode as well as a somewhat advanced wild feature.

Endorphina representatives offered a comment: “It seems that players like the mining-themed slots, and so we couldn’t ignore that. However, we wanted to put more value into the theme, so that’s why we decided to wrap the story around the creation of the important coin in Europe – Thaler. Thaler was the first silver coin and was created in the town of Joachimsthal in the Kingdom of Bohemia (now the Czech Republic). As we are based in Prague, we are honored to share some part of our history with our players. And our cute heroes – the dwarf and his friend mouse – will help players to find the precious materials for it.”

Endorphina is a software provider that is known for its innovative mathematical models and advanced graphics. Headquartered in Prague, this company is delivering up to 12 games per year. With that said, it is currently looking to release 3 slots in February alone. The team behind this brand consists of professionals in various fields, all of whom are motivated by the games they produce.