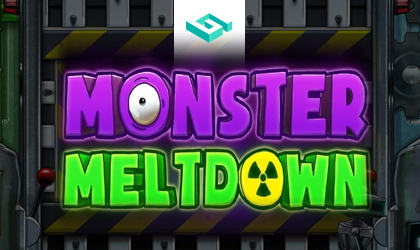 The latest release from Endemol Shine Gaming brings a refreshing theme that stands out from the competition. On top of that, the game showcases some…

…interesting features that have the potential to properly spice up the gameplay. Fans of unusual slots will absolutely appreciate just how odd this one is.

The Not So Scary Monsters and Robots:

Monster Meltdown takes players to a secret facility where all kinds of experiments take place. The theme is set in what appears to be a lab full of all kinds of hazardous materials. Your host, the robot that runs the entire facility, will assist you with the basic operations in the game and of course, spawning the Monsters!

The game is packed with well-designed and thought out animations that make the already great looking game that much more attractive. The cartoonish design of the entire slot combined with its silly nature gives it a very unique vibe.

As far as symbol design goes, things are pretty much following the core idea of the slot. Symbols represent various monsters, each with its own silly facial expression. One thing to note is that there aren’t any card royals or similar solutions representing the lower-paying deck of symbols. Instead, all of the symbols look like your average monster.

That noticeably changes things to a point of confusion. The studio behind this release has a few tricks up its sleeve, though.

The base game is rooted in the familiar 5x3 grid. However, that is where all similarities with other slots end. This slot game utilizes the Scatterways mechanic, which counts wins based on how many of the same symbols appear on the reels. Players will be able to win with 5 to 15 symbols of the same type appearing on the screen.

Although quite interesting, the new core game mechanic isn’t the most impressive thing about this game. That would be the expanding reels. Namely, the title starts out as a 5x3 slot, but can be expanded into a 6x6 layout. This is also the main special feature of the game. Combined with the Scatterways mechanic, this feature allows players to potentially score a 250,000-credit win. That being said, this game game falls among the medium volatility slots.

It features a 96.01% RTP, making it a decent choice for those who appreciate a casual gaming experience.

Endemol Shine Gaming is a London-based software provider that specializes in developing interesting, high-quality slot games for the iGaming market.

The company is a part of Endemol Shine – one of the largest independent TV networks in the world. Although this fact doesn’t directly impact their performance, its gaming division has access to vast resources which has allowed them to come up with some of the most unique slots on the market. Their latest offering is trying to introduce and popularize the Scatterways mechanic, which could give this company a competitive edge in the long run.