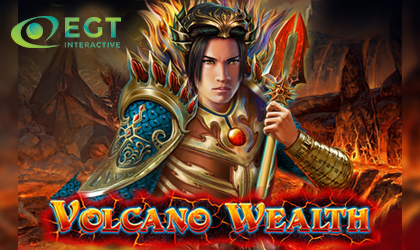 EGT Interactive’s latest release features what is arguably one of the hottest themes on the market. The game is packed with cool features and potentially lucrative mechanics.

Those who appreciate a non-standard slot game experience will absolutely love what this slot has to offer.

EGT Interactive has a knack for creating subtle, yet very engaging games. Volcano Wealth is definitely one such title. Every piece of media available regarding this game is full of volcano-inspired details. Yet, the game itself doesn’t really show much of that in base game mode. That is until you trigger any of the special features.

Once that happens, your entire screen will be covered in lava, giving off the impression that a sudden volcano eruption just swallowed your entire desktop. The shock factor is real and it only gets better. As far as overall theme design goes, players can expect to find simple, legible and engaging graphics. There are very few animations, but the ones available make up for it.

Symbols come in the form of card royals for the lower tier, and several Mysterious characters for the higher tier. Overall, there is something distinctly nostalgic about the way this game looks.

The base game mechanic of this slot feature a 5x4 reel setup that runs on 100 fixed paylines. That information alone should give anyone a hint about the potential the title brings to the table. However, things only get better!

The base game is packed with a generous bonus spin mode. Players who get 3 or more scatter symbols run the chance of winning anywhere from 10 to staggering 50 bonus spins. Considering the 100 fixed paylines, those numbers are definitely exciting.

Other special features include the progressive jackpot system that has four tiers represented by four different card suits. This is a fairly standard setup that doesn’t differ much from other jackpot systems. Lastly, players will have the chance to double their win with the Gamble feature. Gamble allows players to access a simple coin toss type game.

In this particular case, the options are to bet on red or black, however, the core idea is the same. This feature has a lot of potential considering that it is readily available.

EGT Interactive is a software provider with over 15 years of experience in the field. It prides itself on being able to read what players want and implement such solutions in their games. Their level of dedication and commitment has allowed this brand to grow a considerable distribution network that includes some of the top-ranking names in the business among others.

The company currently experiencing growth on all front and is very much involved with its end-users. Driven by the need to give players a good time, it offers some of the most attractive RTP values in the industry.