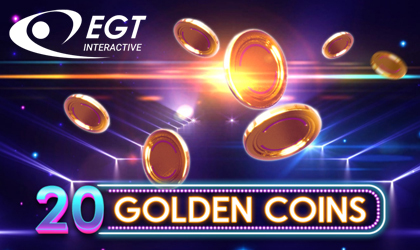 EGT Interactive releases a classic and fruity-themed online slot, 20 Golden Coins, with high-quality graphics and a futuristic theme. The game is also dynamic, which adds general pleasure and amusement. Developers built this title with the latest technology HTML5 and JS, which means it performs well on different devices.

The game has 5 reels, 3 rows, and 20 active paylines and this slot has a purple background and symbols such as grapes, peaches, plums, watermelons and cherries. The most valuable symbol is 7s which acts as a Wild and neon star which is a scatter symbol, and they pay the highest. The 7s replaces all regular symbols, except neon star, coin and Piggy Bank. At least 3 scatters are required for a winning combination. This is a low to medium volatility title packed with an RTP of 95.50%, which is slightly below the average. However, the betting range is huge, and players can place the bets from $0.01 up to $1000!

This is absolutely a next generation title, which has few interesting features. Coin and Piggy Bank are part of the Bonus coins feature, also the Mystery Fudge feature can be activated when there is at least one coin symbol and there is no piggy bank and when there are no winnings available. The Jackpot feature has four levels, which have combinations of Jackpot Cards. Here, players will get 12 cards, where the first 3 matching cards can trigger the jackpot. There is also the Gamble feature, where players can place bets on winnings. Thanks to this feature, players have a 50-50 chance of doubling the winning amount or, in the worst-case scenario, losing everything. If that’s not enough, the Reel Nudge feature is available and also aids in forming winning combinations!

EGT started operating in 2002 from its main offices in Bulgaria, in the capital city of Sofia. Initially, they were providers of land-based casinos across the Eastern European market, and over the years, have increased their business and expanded their influence in over 70 international markets around the globe. They are focused on creating gaming solutions for online casino providers which have greatly contributed to the expressive growth of the slot machine industry, and today this brand one of the leaders in the iGaming industry. Their work has been noticed over the years for creating top-performing slots and helped them to earn several important awards. They received the 2016 VIP Business Awards in the Best Company category and in 2014 they got SAP Quality Awards for Excellence in Software Implementation.