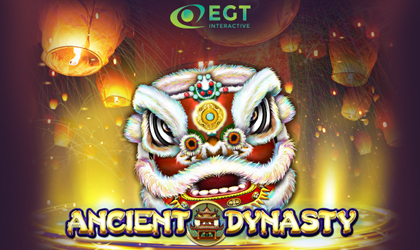 EGT Interactive is bringing another awesome slot game to the markets with the release of the Ancient Dynasty.

The game is packed with potentially explosive features…

…as well as a rather immersive theme. The title belongs to the category of games inspired by the ancient Chinese culture.

Mornings in the Mountains:

The supplier the latest brand to create and release a slot inspired by the ancient Chinese theme. The new game is all about capturing the core of this genre and making it better than the competition using potentially lucrative features.

As far as the theme goes, the team behind this release…

…went with the proven recipe. The game takes place in the mountains of China, near a small town that is sitting right at the bottom of a mountain range. It’s morning and the sun is blasting through the misty morning air under a very shallow angle.

The entire scene looks pretty tranquil and soothing. With that said, the level of detail in the background image is impressive, making it look like a painting.

Symbol design is all about the usual card royals in the lower-paying tier, while the higher paying set features dragons, traditional Chinese pottery, lanterns and much more.

The 5x3 reel slot runs on 30 paylines. The title brings an entertaining core game experience that is only made better by the several special features included in the game.

The first one is the bonus spin mode that is triggered once 3 or more scatters appear on the reels. Those lucky enough to trigger this feature will get 15 bonus spins. With that said, players can potentially retrigger the bonus spin mode by landing another scatter and getting 5 more spins.

The next feature is the Gamble Feature where players can gamble any win that is lower or equal to 1050 credits. Last but not least, there’s the Jackpot Cards feature that brings a progressive jackpot to the equation.

With over 15 years of hands-on experience in the iGaming industry, EGT is still making some of the best slot games in the industry. This company has sharpened its abilities in the land-based sector where its team gathered immense experience. That experience would later prove to be invaluable when handling the challenges of the online gaming niche.

As of right now, it operates in over 85 countries around the world where its games are considered to be quite successful.