EGT Interactive Goes After the Royal Fortunes in Emperors Palace 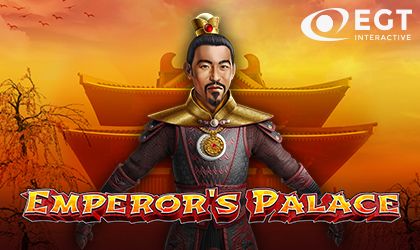 EGT Interactive has prepared another awesome surprise for the fans eastern themed slots.

The company has just announced the release of…

…Emperor’s Palace – a fun but simple slot game that is brings awesome features and plenty of potential for big wins.

This latest release brings a fusion of simplicity and everyone’s favorite far eastern theme. The game packs straightforward visuals that rely on colors rather than detailed graphics to depict an eastern vibe.

The background features a solid orange gradient that is only contrasted by the events on the reels. The reels themselves are convincingly red, thus setting a perfect backdrop for the supplier’s curious symbol design. Speaking of which, there are two tiers of symbols, as usual.

The first tier is comprised of…

The game is made complete by an appropriate soundtrack that adds a touch of immersion to this already fun release!

The 5x3 slot game runs on 30 fixed paylines. The game has a very traditional feel to it, which might lead some to think that it’s limited in terms of features. It’s not.

Those who are looking for something more exciting than what the base game has to offer can look forward to a Stacked Scatter symbol and Stacked Wild symbols.

Each of these brings their…

…own benefits, which include triggering a Bonus Spin mode. Speaking of which. Players can get anywhere from 7 to 30 bonus spins depending on how many scatters are drawn on the reels.

Next, we have the Gamble feature that is essentially a black/red game. Every win brings x2 multiplier to the original stake.

Last but not least there are the Jackpot Cards.

…jackpot amounts that come in four different levels. Each level is marked with a card suit. The jackpot mechanic is randomly triggered during the base game!

EGT is a premier supplier of content for the iGaming market. The company is known for building high-quality slot games as well as developing innovative tools for their B2B clients. With a team that is constantly working on bringing new math models and in-game mechanics to the reels, it has developed quite a following over the years. On top of that, they have also developed a sizable distribution network of top tier partners.