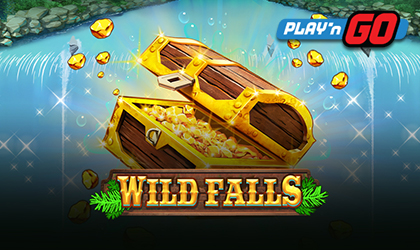 The holidays are over and it’s time for some action! If you’re up for it, then we recommend you try out the latest slot from Play’n GO called, Wild Falls!

Go Back In Time:

This game is like a time machine. It will take you back to 1896 where you will have to head down to the Yukon River and start grabbing some prizes!

This river holds many surprises. One of them is a never-before-seen feature where you will stumble upon wilds as they are floating on the river and then suddenly fall onto the reels!

It is widely-known that in most scenarios, these symbols are extremely helpful. The same goes for these.

Namely, they will slowly move towards you (meaning reels) and at the same time help you enhance your chances of creating more winning combinations!

Do We Have Other Useful Icons?

Of course, you do! It’s hard to imagine a good slot without having a scatter icon. In this game, it comes in the form of the chests and it is going to help you activate one out of four sensational features!

Let’s Talk About Them:

In the first, the shest sign will turn into Golden Chests. The feature is triggered during classic spins, however, once it is launched, Golden Chests will appear for that spin and all the others that follow.

These chests have three types of multipliers (2x, 3x and 5x which can go up to 125x). If they are seen on the reel during Gold Rush, Super River of Gold will be triggered!

The second one is launched if one or two chests appear on the reels! Once you are rewarded any winning pay lines, the wild is held in place and all other positions re-spin.

Furthermore, you will be awarded on any new winning lines and then this symbol will fall of the reels and re-spin will no longer be active.

On the other hand, if another wild lands on the reels from the re-spin, both of these characters will stay and you will get another opportunity for re-spin!

If the third one is seen along with the third re-spin, any winning pay lines will be paid out which means that River of Gold Extra Spins will be activated!

River of Gold is blasted-off if you land three scatters on reels two, three or four during the game.

During this feature, chests will walk down one position in the reels until they fall off the bottom!

And last but not least – Super River of Gold. This feature also contains chests that are golden and all of them contain multipliers. It is similar to River of Gold.