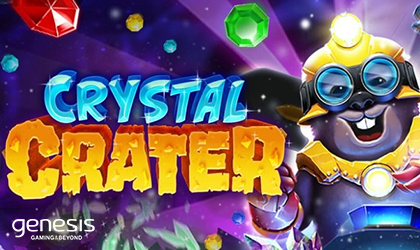 One of the latest slots to hit the markets this year comes from Genesis Gaming under the name of Crystal Crater.

The game brings many potentially rewarding features as well as a theme that is offering something a bit different compared to most others out there.

The new slot in its Radi8 series is all about finding and collecting the gems and jewels from beneath!

The developer went with…

…a simplistic theme that depicts a mole rat decked out in mining gear as it digs deeper into the ground in search of riches. The background sets the whole game in an underground cave that’s dark and damp.

With that said, our mole rat friend is animated, giving the whole game a bit of life. Symbol design is exactly what you’d expect it to be. The whole jewel theme translates to all kinds of stones appearing on the reels in the higher paying tier while the lower paying tier comes in the form of card suits.

At its core, the release is a 5x4 slot game that utilizes 50 paylines. Those who are looking for more thrill than what the base game is capable of offering can delve into this slot game’s special features.

Namely, there’s the Random Wilds mode where players get to…

…select the combo of wilds and extra spins they like.

Then there’s the special feature activated by drawing 3 scatters on the reels that leaves room for massive wins.

Peyman Zadeh, Director of Products, offered his take on the product: “When you first start spinning in Crystal Crater, you get a really fun and quirky feeling. The powerful random wilds and stacked wilds that can hit on virtually any spin amplifies the spontaneous excitement to keep players in the moment on every spin. We also wanted to let players really feel the power of the game with the pick feature for free spins, giving them control over risk/reward. Crystal Crater is all about powerful gameplay wrapped in a lively and easy-to-digest experience.”

Genesis Games is a premier software provider that specializes in slot games and other gaming solutions to the iGaming industry. As a part of the Gaming Group, this studio is currently working with a variety of popular operators in various key regulated markets around the world. Their Rad8 line of games focuses on Asian markets where this brand is fairly well ranked.