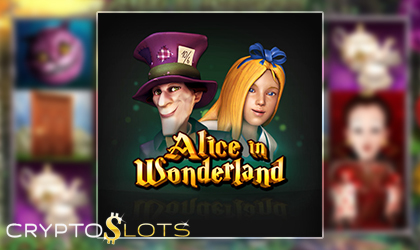 Cryptoslots, a cryptocurrency only betting site, has announced the release of a slot game based on the Alice in Wonderland story. The game features sharp graphics…

…cool mechanics and more. Interestingly enough, the studio behind this title has made it available on their sister site for quite some time.

Cryptoslots’ latest release comes shrouded in confusion. The company announced the release of Alice in Wonderland hinting a brand-new, never-before-seen slot. However, that may not…

…be entirely true. This game has in fact been available on WinADay for quite some time.

With that said, the fact that the game features great graphics and a fun base game hasn’t changed. Players who decide to give this slot game a try will run into all of the familiar characters from this legendary story. Featuring graphics that are rooted in 3D, the game stands out compared to similar releases with this theme. It is arguable that the choice of graphics as well as the…

…design style of the symbols gives this game a slightly unsettling vibe.

The background features scenery from the story with large mushrooms, colorful roses and garden walls dominating the view.

Symbols and Base Game:

The base game used for this release is rooted in a 5x3 grid that runs on 30 fixed paylines. The game utilizes a progressive jackpot mechanic that gives it more depth than it lets on.

Michael Hilary, Cryptoslots manager, has commented on the newly released game saying: "Like the much-loved children's story, this game is destined to be a classic. Our designers have done an amazing job of illustrating the fantasy characters. And with its free spins feature and expanding Wilds, I think we're going to be paying out some massive wins on this one!"

The new release is available at Cryptoslots and affiliated online casinos.

Cryptoslots is a content provider and online casino operator that specializes in the slowly-growing crypto side of the iGaming industry. The company has been active for over a decade, designing and delivering various iGaming solutions to the market. One of their main policies focuses on furthering the use of cryptocurrencies in online gambling. Their online casino currently accepts various forms of crypto payment.

Another thing this company is adamant about is transparency. That is why all of their releases feature a Provably Fair checkmark. Provably Fair system is a mathematical method that guarantees that no one can interfere in the mechanic of the game.

This applies to both players and casino operators, but also anyone else. The system works by showing players a concealed set of possible outcomes for the upcoming game. All of this happens before players officially start playing the game. If at any point there is doubt whether the result of the game was influenced by outside activity, players can check the hash data from the server matches that on the client side.