Check out the top 5 games from Booongo 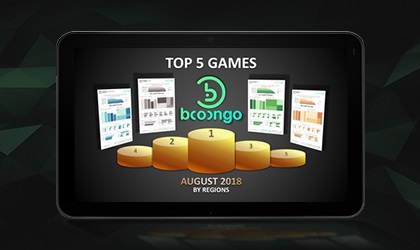 Booongo has done us all a favour and released some information on their most played games for the month of September. Today, there is starting to be so many great slots at the market that it is hard to tell which ones you should play. As such, what other way to decide on a good slot than to take a look at what other people enjoy playing more than anything else? These five slots are pretty much consistently played on all continents, so take a look below and decide which one to try.

Apparently a great favourite amongst all players, 88 Dragon offers plenty of re-playability thanks to multiple features and great wins. The game comes with four different jackpots, ranging from mini to grand. The 88 in the name is not a neo-nazi reference, in case you were wondering, but rather a lucky number from Asian cultures. It ties directly into the game features, allowing the player to upgrade symbols and win even bigger prizes!

This unique title is not so much about the Viking Gods, as it is about the gold the Vikings collected from all gods. The idea is to compete for that main pot and claim it all for yours. The game comes with superb graphics, offers plenty of animations, and has several exciting features. Wilds and extra spins are combined with fifty paylines to make every spin an exciting opportunity to walk out with a fortune!

Booongo’s God’s Temple slot still remains popular years after release, which is evident even by the fact that the company has also released a deluxe version of the slot. Both of these remain one of the most played across all casinos. And why wouldn’t they be?

The games offer a pyramid reel structure, which is certainly something every player should have a look at. On top of this, you can land scatters, stacked wilds, free spins, and six symbol win combinations. The major difference between the two versions is the ability to collect symbols and change them for extra spins in the Deluxe version. During extra spins the board is reversed to make it even easier to land countless winning combinations!

You guessed it, this one is inspired by the legendary tale of Snow White. Meet Prince Charming, test your mettle with the evil witch, and dance around with the seven dwarves. The game rewards longer playthroughs, as every time you complete a mission goal you are awarded with plenty of extra spins. Special features include additional winlines, mirrored, sticky, and growing wilds, additional spins, and much more. Choose a casino and join the fun!