Champions Of Rome A Reel Slot for Voracious Players 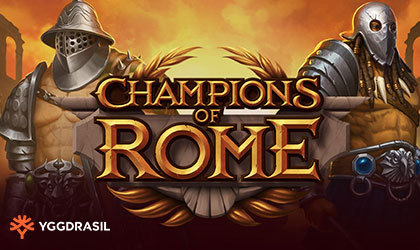 Creative and inventive gaming provider, Yggdrasil have decided to add some action and excitement to the lives of their faithful players by developing a game that is filled with battles and heroic moments. Let’s check it out together!

This slot is all about showcasing how powerful and almighty you are. It’s called, Champions of Rome and it will give you the opportunity to meet and fight against strong and determined gladiators.

It is widely known that Rome is a city of many wonders and beautiful buildings. Perhaps one of the most popular ones and a place where many thrilling battles have occurred it precisely the Colosseum, an ancient theatre of combat.

Those who launch this game will witness dangerous clashes where no one is afraid of using their weapons, such as tridents, swords, and many others and make Wilds appear as they smash into the reels.

Use Your Strongest Ammunition:

We actually think of the most exciting part of the game – Added Wilds with four Wilds hitting the reels each time two Scatter icons are seen during base play, as well as in every spin when Casino Spins Mode occurs.

Besides these things, players will have the chance of utilizing two different Slot Spins Mode. One of them is called Training Mode and the other one is Deathmatch.

Depending on your mood and whether you are up for some action, you can pick each of these two. Both will surely spice things up.

In the first mode, players can receive up to eight additional spins and keep on getting more. During the second one, they certainly have a smaller amount of these spins to collect some coind and grab a multiplier of up to 4x on all their earnings.

If by any chance, they fail to win, they must give up their earnings from that round but that’s not as horrible as it may seem because they will be bestowed with some form of consolation prize that comes with either several coins of Training Mode spins.

“Champions of Rome is a visually impressive game where players are in control of how much they want to risk. Seasoned slot warriors can satisfy their thirst for adrenaline by choosing to risk it all, while more casual players can make a more conservative choice with guaranteed winnings. Fortunately, with four Wilds regularly hitting the reels, the gameplay experience will be entertaining whatever strategy they choose.”

It’s worth mentioning that the slot is made on proprietary HTML5 client framework, Isense2.0+ which enables spotless gameplay on both computer and mobile phone. This one (as well as the others) is equipped with a collection of in-game promotional tools including BOOST.