Cast Your Fears Aside With Wu Zetian Slot from RTG Asia 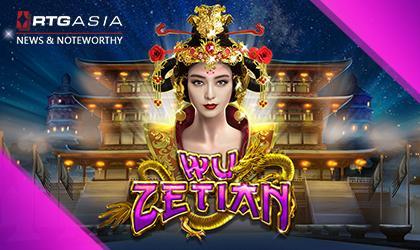 Strong, independent and powerful women have always been an inspiration to many artists. The gaming industry is no exception and this time, we are talking about the first, and ultimately, the last Empress of China.

What Do We Know About Her?

Wu Zetian, who was also called Wu Zhao, Wu Hou was the only one who had an opportunity to wear the yellow robe that belongs that usually men wear.

More than 1000 years ago, she influenced Chinese culture significantly and some of her strategies and ideas can still be seen in the present day.

She didn’t make any compromise when it comes to being fair and righteous. Wu Zetian even managed to outgrow the Tang dynasty in every single aspect – economy, size, as well as power.

Furthermore, she even constructed a government based on meritocracy, because she wanted to give an access to more common people along with privileged classes.

That’s how omnipotent she was! Without any problems, by utilizing her secret police, she was able to defeat any of her real or potential threat. Enemies were afraid of her and she even broaden her empire into the Korean peninsula and into central Asia with the help of several generals.

She Had A Gentle Side Too:

Although it may seem like she was as cold as ice, Wu Zetian was actually a truly kind and gentle soul.

She loved writing poetry and was also very protective of children. That’s precisely why she deserved an homage in the shape of a video slot powered by RTG Asia.

Let’s uncover more details about this game. It is extremely volatile and here you can receive a staggering pay out of 50,000 times your bet per line!

Furthermore, this slot machine consists of twenty-five pay lines as well as five reels. The good (not the only one though) about it, is that you can easily grab some prizes, without actually having to murder anyone!

Even though, it’s been a while since one of the most important events has occurred (AGE Cambodia), it’s worth mentioning that RTG Asia honored them with their presence too!

Each year, this event successfully attracts many visitors from different parts of the world, hence, it’s no surprise that they wanted to be among other relevant companies.

This company was located at booth 130 where they have showcased their latest products! We are not sure if Naughty or Nice video slot was also presented, but what we do know is that people loved their selection of superb games!