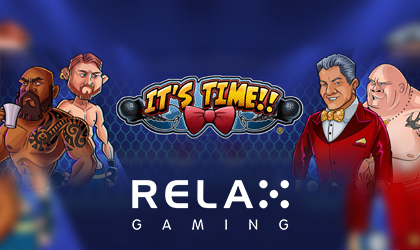 Relax Gaming, a premier software provider in the iGaming industry, has released a brand-new slot that captures the thrill of MMA and…

…delivers it in a potentially rewarding package. The game was created in cooperation with Bruce Buffer and is a real treat for any fans of this combat sport.

Relax Gaming and Bruce Buffer have worked together to launch the It’s Time!! slot aimed at fans of MMA and combat sports in general. Being such a high-value project, the game is attracting a lot of attention and is one of the developer’s featured titles. Those in the know will recognize Buffer as the legendary voice behind the ‘It’s time’ expression that has become somewhat of a tradition in the world of MMA.

This slot is a part of a two-piece series of games the supplier has done with the Buffer brothers. The other one being the ‘Let’s Get Ready to Rumble' featuring Michael Buffer – the trademark holder for said legendary expression.

Diving into the Features:

The game features a 6x4 grid setup that runs on 40 fixed paylines which adds up to a max potential win of 2500x the original bet. However, things get a lot more interesting once all of the special features are accounted for. Players will get to enjoy the Hot Spot feature, a thrilling Fighter Bonus as well as potentially lucrative Buffer Bonus. Once the Fighter Bonus is triggered…

…the game moves into a fight mode where four featured MMA fighters go against each other. At the end of the game, the fighter with the most symbols on the reels wins.

Simon Hammon, Chief Product Officer at Relax, offered a comment regarding the new release and cooperation with the Buffer brothers: “Partnering with Michael and Bruce Buffer to create these two exceptional network branded titles demonstrates Relax Gaming is at the top of its game in creating innovative content. Let’s Get Ready To Rumble has already proved to be a smash hit, and the addition of IT’S TIME!! will continue to drive our portfolio’s strong performance with the same high quality of immersive gameplay, thrilling features and a unique theme that resonates with a variety of players.”

Relax was founded in 2010 as a project of two like-minded software developers. What started out as a small company has grown to become one of the most prolific studios in the industry. Driven by the goal of delivering better, more entertaining content to players worldwide, the developer has quickly appeared on the radar of Unibet – a popular operator with a massive reach.

Having such a strong partner at their side meant that it could reach the full potential of their creative ideas. This cooperation has yielded a number of impressive slot games over the years, including high-profile titles like the one we’ve talked about today.