Booongo Turns Up the Moonlight in Moon Sisters Slot 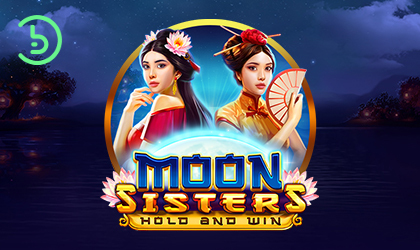 Booongo has announced the release of a brand-new game titled Moon Sisters. The company is excited to drop one more Hold and Win game to be added to this collection. Fans of the Far East theme are in for a treat as the art and gameplay bring a great balance of traditional iconography and exciting features.

The developer’s latest release brings a relaxing story that is all about two sisters and their adventure. Players are in for a traditional game that is set in the Far East. The background depicts…

…a small bay lit by the moonlight. The skies are clear and the stars are out. Both sides of the reels are decorated with trees that give the landscape some character. Additionally, each tree is packed with Chinese lanterns that offer a great contrast to the nocturnal nature of the game.

Symbol design brings a great deal of detail in the higher-paying tier. Players will run into cherry blossom tree flowers, butterflies, the two moon sisters, and more as they spin the reels! The lower paying set comes in the form of card royals.

In addition to all of these symbols, there’s also the Moon symbol and the Wild symbol.

As far as features go, the title offers a limited selection. However, the ones you do get are quite potent.

…that substitutes all symbols except for the Bonus Moon symbol. Speaking of which, this symbol is used to trigger the Bonus game. Once that happens, players will only draw Moon symbols during the bonus spins.

Every Moon symbol features a multiplier that varies in values from x1 to x25 the total bet. Additionally, players could trigger the progressive jackpot feature that brings the Mini, Major, and the Grand jackpot.

Yuriy Muratov, Head of Account Management and Business, said: “We’re thrilled to announce the release of our stunning new video slot, Moon Sisters, the newest member of our expanding suite of games. Featuring a variety of exciting Jackpots and the popular Hold and Win mechanic, we’re sure this new title is going to brighten the gaming experience and will make a great addition to an operator’s portfolio.”

Booongo is one of the more recent software providers to join the industry. The company has first appeared on the radar in 2015 and has since been creating some innovative games. With a dedicated team that is spread out in South America, Europe, and Asia, it is always looking to offer its players something new and exciting.