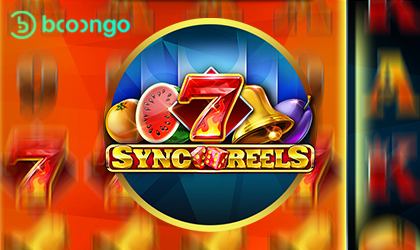 We sometimes miss those classic fruit slots, because they are not as popular as they used to be. Fortunately, there are still some developers who remember them and wish to bring them back into the spotlight, with proper upgrades, of course.

Not Just An Ordinary Game:

Seemingly, you may think it is, but that’s not the case with this game. All players have to do is to synchronize the wins in phenomenal 243 pay ways! Now, we forgot two extremely important things to mention (silly us!) – the name of the game and its studio.

It is titled, Sync Reels, and is powered by the always alluring Booongo. Namely, they created a game in which five reels are randomly synchronized, meaning that all icons can be seen on every single reel in sync! Interesting? We think so!

In order to uncover more surprises, players must continuously spin the reels and see what could potentially occur when lucky 7s, bells and fruits appear on the lines to break out with BigMegaSuper Wins!

The true meaning of the wild, along with its power can be experienced precisely in this video slot. Namely, in this jam-packed game, they can reward gamers with a staggering 1300x win!

Generally speaking, despite looking plain and simple at first glance, the title is anything but that. After all, with randomly synchronized reels, gamers are always on the synchronized streak!

Good news is spreading like crazy in this company. Just yesterday, they announced that they’ve made an agreement with BetConnections. According to this dealership, they will export their vast range of various amusing products, as well as keynote industry solutions for the Latin America B2B market.

They pride themselves on offering more than thirty-five exquisite reel slots, some of which have already taken their place among the best. We will single out just a few, such as, 777 Gems, Dragon Pearls: Hold & Win, Viking’s Gods Gold, God’s Temple Deluxe and many more.

All residents from this part of the world will now have these superb games at their disposal. Now, who wouldn’t be happy about that, especially if we take into consideration that each of their reel slots are packed with cutting-edge graphics, immersive sounds and atmosphere, rewarding and tempting features, etc.

“Here, at BetConnections we are very pleased with this new commercial association with the prestigious brand of games BOOONGO, who are widely recognized as one of the safest and most accepted suppliers by players worldwide.”

“The online casino market in Latin America shows significant year-on-year grow and this has attracted our attention. Starting now the players in Paraguay, Peru, Columbia and not only will be able to play our amazing games but also engage each-other in tournaments. Our partnership with BetConnections underlines the commitment we have for the local market and local partners.”